We got going about 11:00 to the SAM. I first went down to Pike Street Market and picked up some baked goods and some fruit. I also bought two cedar planks with seasonings from Pike Place Fish known as the chef’s special. These are the guys that sing and throw the fish. As I was buying my stuff, one of the guys was cleaning the hats and other trinkets for sale, “Fish guts on them.” I suggested that was a working hazard here and that got a smile. And then at Choice Produce, I purchased ripe peaches that all but exploded with ripeness and some nectarines that are good for a day or so. They also had some pepper hangings that I know Corwin would love to have access too. I still need some cloth grocery bags so I got one too. I was wearing my t-shirt from Ringling College and the fruit seller told me he was a graduate. I told him I just knew someone who just graduated. Michael, his name, said to me that he graduated a few years ago in Illustration from Ringling and had been in the Seattle area for five years much of it selling fruit. He did seem happy to sell fruit. 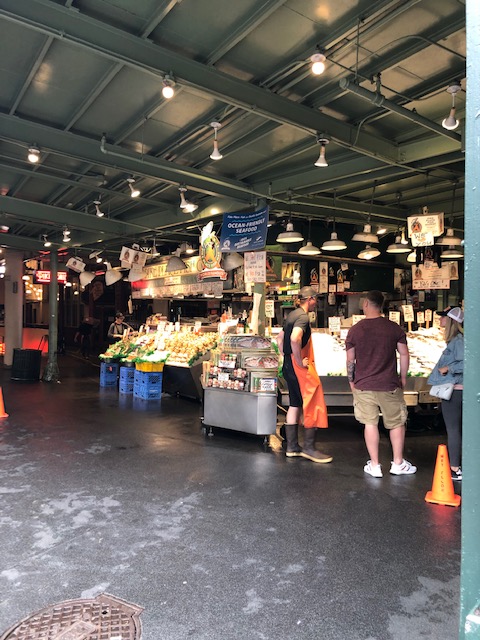 Susie thought the bear claw average, but the cinnamon roll made up for it. I had a bagel with local smoked salmon and other items that did not improve your breath. Excellent!

I then pushed or more like pulled as it was downhill to SAM. It was the Victorian Radicals show we headed for. There we learned about the history of art in Britain and the Pre-Raphaeli movement–about 1850-1915. With the new pigments and a desire to paint what you saw instead of trying to paint the light and contrasts, the Pre-Raphaeli artists were a rejection of the flowery and muted colors so loved by Queen Victoria for more detailed and colorful. Not photo-like, but bright and a bit stark. I did like the early paintings. Victorian and early twentieth-century painting just is not interesting to me. This was interesting for some of it. I find that only the stained-glass, dresses, and textiles (I just love Morris) are of much interest in the later period. I like art deco instead, which comes at about the end of this movement.

The display at SAM started with paintings from the Queen’s (Victoria), favorite artists. The Great Exposition showed all this art to glorify the empire. A fantastic rug that likely was in the show is included. It was created by a steam-powered loom. The display then moved into the new look. These paintings show super attention to detail and coloring that was fantasy. To me it looked like what would have happened had you given the old masters new paints and asked them to paint what they see. I did not know that we had such painting in the late 1800s.

Slowly the style changes to the less detailed, and I am less interested. But then the textiles are there and William Morris, one of my favorites, is included. Even a dress made of Morris cloth! I am sure you would recognize his works–they show up around Christmas time.

Some stained glass is also great. One object is just a hand drawing of the plan for the glass. It is all that exists now as the glass did not survive WW2.

We finished up and have an average at best lunch at the museum Taste cafe. We then pop up and look at the ancient art. I find that art museums often have exciting historical art items. I am not disappointed. They have heads from Egypt from the 18th dynasty and even older smaller pieces. Some Sumerian too. I am frustrated again as they have cuneiform tablets on display without translation–I find this at most museums. They need to get them translated and display the meanings. These looked like counting documents, so it likely said something like “Joe has three goats, three buckets of beer, etc.” but still it would be better to tell us more about them. I have been wondering about writing a Python program that translates photos of cuneiform. Hmmm.

Susie is now mostly putting up with me. So we head to something I have not seen before at a museum: The Porcelain Room. There is a computer screen, touch screen, you can use to identify the porcelain. The room is full of porcelain from floor to ceiling. Susie is now really polite as I walk by and study plate after plate, cup after cup, and so on. I then look up what interests me.

And we head back. Susie wants a bit of rest. I push Susie up the hill this time. Oddly, it is more comfortable as the walker is not trying to use gravity to get away with Susie. We also do a bit of shopping and stop at a few shops. Susie gets some rest.

I head into the Pike Street Market again. I visit the Bavarian Meats store and procure a box of meat. I am told there is a Purple store. I finally visit it, and yes everything is purple and locate a hat for Susie. I also find a tie-dyed Seattle shirt for her.

I head to The Crumpet Shop to have tea and crumpets (their website is hacked and shows male enhancement pills, so this is the yelp page instead). There I answer the Facebook questions about the store, I am a trusted reviewer. “No–Jet skies are not available here,” I answer. “No–it is not a computer store,” I correct. More hacking, I am afraid.

The rain starts as Susie, and I head to the Hard Rock Cafe. Just the light stuff we get in the PNW. There we have poor-quality food to the sound of Rock-and-Roll and screaming unhappy children. The closet child started to scream when Madonna appeared on the screen, singing not one of her better songs. I agreed with the child.

Susie gets a t-shirt. Another Hard Rock Cafe visited. Our most exotic Hard Rock Cafe was in Beijing with the sign, “No Drugs And Nuclear Weapon Allowed,” above the entrance. It is a thing we do. Update: The one in Beijing is apparently closed and gone.

(Yes that is Kurt’s)

We head back tomorrow.