I am running very late tonight and tomorrow is a rushed day. So I will be brief today.

The morning was spent in meetings and talking to folks at work. Some were, and so frustrates me, Zoom meetings that could and should be in-person. I do not like calling into meetings from the office to talk to people on the same project (and sometimes in the same room!).

I went to Susie’s, braving Beaverton and 217, after 10ish this morning. Susie had just finished breakfast, and it was a nice summer day, so we headed out into the park. There we reached Leta, Susie’s mother, on my iPhone. Susie and Leta had a friendly chat with me and talked to Leta too. Leta was at lunch at Panera’s and offered to email me the almond chicken sandwich, which she ordered without bread (it comes in a lettuce basket).

We enjoyed the park for a while, but it was a work day for me, and I had to leave soon. So, with a kiss, I left Susie with Vanessa, today’s nurse aide. Susie was better today and less confused.

I stopped by Burger King and had a whopper with cheese sticks (never again) and diet coke before turning to work.

I spent the rest of the day at work following along and talking to folks about various issues. I headed home at 4ish and checked back into work. I got the two stools I ordered in the mail. The one used for step exercises might work for Susie getting into the Air Volvo–I put it in the back for Thursday’s physical therapy–it is wide. I will likely send the other one back (too small).

I had cookies for a snack and then headed to First United Methodist Church. It is Wednesday and choir practice. I play games with Zophia, 11 years old, while her mother, Dondrea, does band and choir practice. I brought Scythe, and we spent the whole time learning and playing Scythe. While this is a 4X game (Explore, Expand, Exploit, Exterminate), it is light on combat but heavy on the process. Like all 4X games, it is a highly competitive and can be mean (ego bruising). Your turns are complex, and the strategy is also cdifficult 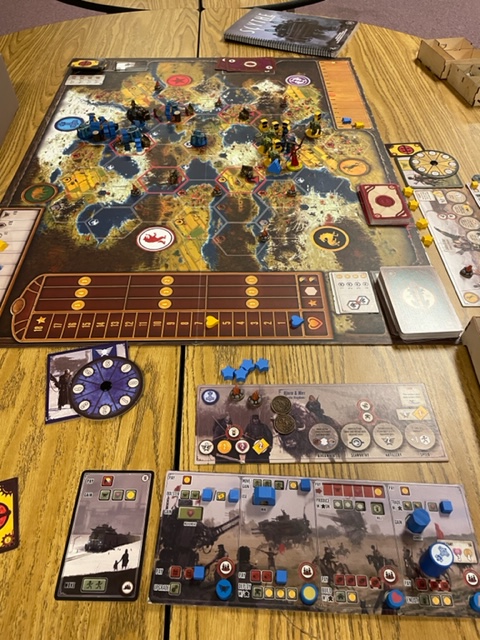 It is ranked as the 16th greatest game on Board Game Geek. It is a hoot to play once you get the flow and the rules and yre ready to be ruthless. There are many ways to win, and you have to be more efficient (or ruthless)  Zophia started to get it and deat me back in combat once (with a smile). I scored about ten points on her at the end, but she had me worried, and that was not bad for a first-time play!

As I said, we only got one game done, and after that, I stopped by Olive Garden to get pasta, meatballs, and salad. I was hungry, and I was still thinking about the dreams, despite the distraction of Scythe. So I ate dinner while watching another Lucifer episode on Netflicks. St Lucifer’s episode was better than the previous one and had my attention.

After that, I went to write this blog and rushed it–sorry.

The pain in my leg, while not much better, is less sudden and seems more to be just a pulled muscle. Maybe it will get better after some rest.

Mister Lincoln has grown back to full size at the end of summer.

Thank you for reading.