Today is the day of the big party. We all came here to celebrate Joyce’s 90th Birthday, Susie’s aunt. It is also Susie’s mother’s birthday. Hope, Susie’s nephew’s wife, birthday was just a few days ago. So it was a day full of birthdays.

I started the Saturday morning with the usual and then meeting up with Barb, Susie’s sister at Joyce’s apartment. The party was at 2PM, so we had plenty of time. Barb and her whole family wanted to walk, so I joined them.

This is my, “I am up what are we doing” text picture from this morning.

Well, Ashville downtown is about 1.5 miles from Brook-Howell. Clint, Susie’s niece’s husband, decide to stop once we got to the first strip mall and left us to acquire breakfast and to fill Hope’s order. I then continued with Barb and family for another mile. Mesha, Susie’s nephew, married to Hope (if you are keeping score) was also was us. He is a gluten-free guy, and so we need a more let us say a less traditional breakfast.

We found the Green Sage Cafe, which fit the bill. It was very well accommodating to gluten-free and vegan and other options. I tried to order a vegetable bowl but was informed that only breakfast was served, so I asked the cashier what she liked and order that. I did not know what it was. It included two still runny fried eggs–excellent. I broke the eggs and let the golden goodness enhance all the rightful veggies and rice. My that was good. You tell you are in the south as the food was perfect.

Mesha headed over to a gluten-free bakery and Gordon, and Kaleb (Barb’s husband and their son–got out a scorecard yet?) headed back. Leaving me, Barb and her daughter Emma to explore the Yoga Festival. This was just a bit of the part of the festival in downtown (I learned later) and some folks selling services. The greater festival was elsewhere: Asheville Yoga Festival. 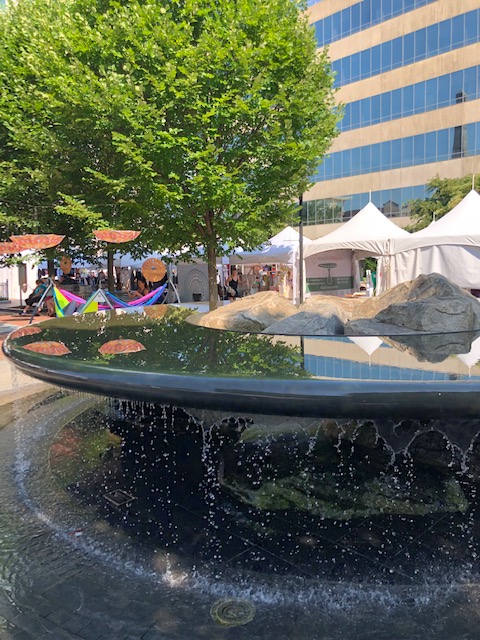 It was still lovely, and if you need equipment (i.e., mats, weighted blanks, tees, yoga pants, marijuana, jewelry, tea, and so on), they had it ready for you to purchase. We walked through the park where the little festival was set-up and looked at the options. I met folks for a retreat center where you can “Restore Inner Balance”–maybe next time: OM Sanctuary.

I was happy to meet the people that made the gift I sent my sister: A cloth grocery bag with “Eat Locals” and a zombie on it. I did not know they were based here in Asheville until after I purchased them. You can see that the gal has an “Eat Locals” shirt on. 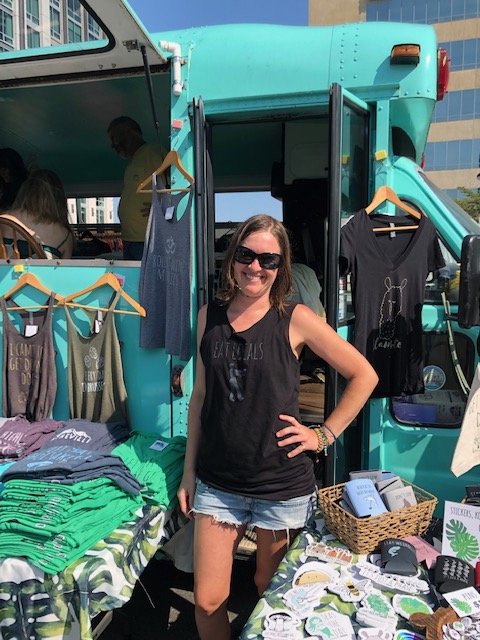 Available on Amazon or at their shop or at the park in Asheville or their website: Moonlight Makers.

We, now just Barb, Emma, and me, next tried a few shops with amazing tees (one with a cat Darth Vader using the “force” on a goldfish). The unofficial motto of Portland, Oregon is “Keep Portland Weird,” but Asheville has a tee that says “If Asheville is not weird enough for you, you ARE too weird.” I did not know that Portland had competition.

Next tea. We went to Dobra Tea for tea. It was great and calm. Our phone had exploded with texts. The folks back in Brooks-Howell were trying to find the syrup and waffles. There was a lot of texting and back and forth, but in the end–from what I can tell–everyone who needed a waffle, pancake, or other forms of syrup using foods was served and syrup supplied. We walked back.

We then collected Susie, Leta (Susie’s mother), and Barb’s family and headed for lunch at Chick-fil-a. I had never been to one that I remember. Leta is not a fan as Chick-fil-a is infamous for its political stance on Trump (pro). I do not use politics to judge food; otherwise, I would miss out on some excellent and healthy eating. I liked my sandwich, spicey.

The party started at 2, so we rushed back and got ready, and I helped put the AV in order and grabbed my laptop to play the PowerPoint of Joyce’s life done by Barb. It seems that only my computer, Apple MacPro Retina 2014, had the older DVI to connect up. Gordon and Emma had to rush off and get no sugar added ice cream for all of us with sugar issues. They were back soon, and we had a great time. The other members of Brooks-Howell’s community came and we, the family, served them ice cream and cupcakes (with and without sugar) and cake (as usual) while Joyce’s life as a Methodist missionary showed on the screen. 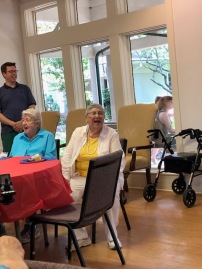 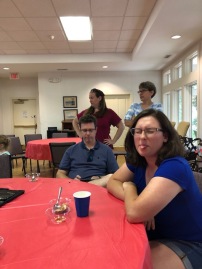 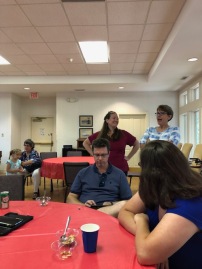 Susie chatted with the folks. I played with the young kids, when I was not helping to eat the ice cream, who then ran off with my wallet and phone. Kaleb retrieved them for me. We fed the local mosquitoes.

We sang “Happy Birthday” for Joyce.  We had photos taken of the family. I did not get those. I suspect I will see the prints of the pictures in family homes for years.

Clean-up and then Pizza for dinner. I return to the room. I closed my eyes for just a moment, Leta wakes me “When are we leaving”? Actually, fifteen minutes ago. Oops. Susie said nothing about me falling asleep.

We drive back to the places I walked to. Parking is a mess. I found a hair salon that sells its parking, on the same block, for $5. Sold. No reason to hurry and about 40 minutes later we have all 18 of us crammed into two booths.

The Mellow Mushroom is a chain of edgy pizza, again reminding me of the Pacific Northwest. 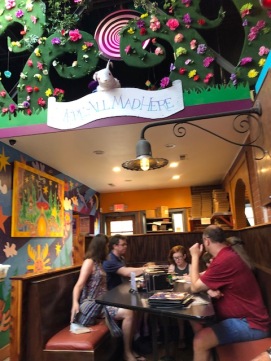 One hundred minutes later or so the pizza comes. The waiter explained that they are understaffed (on a Saturday!) and the managers are re-learning their pizza skills. I think she said, “Bless them, they are trying.” It was good pizza (we did call them three hours ahead to tell them we were coming).

Back late. Off to church in the morning. Most folks are headed back home or on to more adventures on Sunday morning. We leave on Monday. 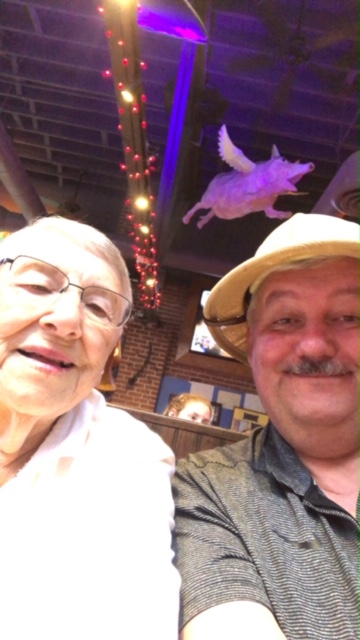 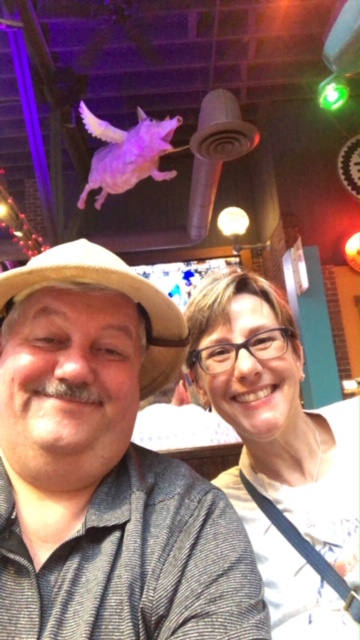