Sometimes it is a good writing practice to start now and go backward.

I just about finished the 6th Maisie Dodds novel–how can be six already. I bought it just a few days on my Amazon reader. I will get the next one and keep going. I enjoy the stories with their mix of the 1930s, flash-back to the Great War, and some mysticism. The last one was in near real-time as it was to stop what we would call a terrorist attack from poison gas from a man driven mad by isolation caused by his injuries. Highly recommended, but read in order.

Before reading for a bit, I served Susie, a bowl of my version of Moroccan chicken. I had some Tagine spices, so I combined some chicken thighs (boneless) and olives, carrots, celery, lemon juice, chicken stock, garlic, and what else I had. I first cooked the garlic and then threw it all in a dutch oven and cooked it for an hour. It was good, and I had two bowls. Corwin was headed over to his friend’s house and so did not get any. I have a bowl waiting for him in the frig.

It took some time to do all of that, but it left me waiting a bit. I picked up the RMS Titanic model today. More prep! It always seems like you do weeks of prep, and then suddenly, the model is done. I have some filling to do tonight, so I used my light modeling paste to fill. Often I would use modeling filler, but it is hard and heavy. This is a tiny 1/700 scale model, so I used the paste I used for landscaping bases for figure bases (28mm figures are also tiny). It filled the holes where I removed staircases, and other adjustments called for the etched-brass and wood decks add-ons I have for this model. All of that is drying now, and I will then adjust, sand, cut, and finish on Sunday. 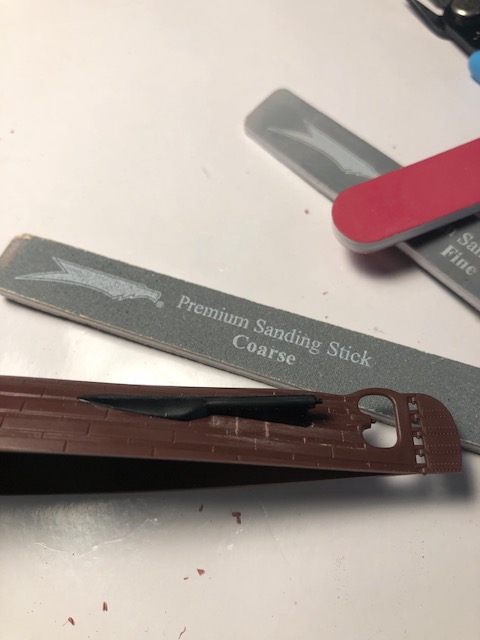 You can also see I have moved to sanding sticks. They work better than anything else I have used before. I can polish the plastic after I sand it a bit. My other secret is Tamiya Extra Thin Cement for plastic models. It welds the plastic together and avoids gluing me to the model!

Aside: I learned today that the tiny bit of hull between the middle propeller and rudder (visible on the model) had pitted and broke on the Olympic (being the only long-lasting ship of the three built: Olympic, Titanic, and Britannic) multiple times because of the interaction, electrolysis, of the different metals of the propeller and the steel hull in saltwater.

Before I got back to the Titanic model, I made scrambled eggs with cheese and ham for lunch. Susie and Corwin enjoyed them. They were up just after twelve, early for them.

I made cupcakes this morning after reading email and checking that shoe company did not need me. I have the Cake Bible cookbook, and there is a chocolate cake recipe that uses mayonnaise, and I have wanted to try it for weeks.  I made them from scratch using the cookbook recipe, and they turned out great. Susie and Corwin love them–a bit chewy and soft. I will make them again! Breakfast was coffee and a banana about 9ish.

I did spend time on Facebook, hiding what I would call race-baiting and white-folk explainer posts. I am not interested in that. Show me your baking and cat videos instead! I also stopped following a blogger today when he went that way too—nothing I want to follow.

Today it was reported that more than seven-hundred people lost their lives to the virus here in the USA. The active infection rate is increasing in the USA. These reports show California, the most populous American state, has the highest number of new infections. Still, Louisiana, Arizona, and North Carlina have considerable increases in the rate of infections and numbers of new cases. I found this new song that I did not know: Wind Who Makes All Winds That Blow.