The morning started with me waking for my alarm, again sleeping through the night. The sun was up and shining in complete ignorance that the weather report said it should be missing while we instead should enjoy unrelenting rain. The microclimates that make up the small valleys here make it impossible to predict our weather in Aloha (now Beaverton and once Reedville).

My approach is to always assume it is raining and will rain all day until the rains stop in July (and now, due to climate change, the rains may halt in June). It is pretty surprising, but once the rains stop, they are done for about 90 days, with thunderstorms being the only rain in the summer in our new climate that is only five years old. Before the significant climate change, we did not even get thunderstorms. Now we also get hit by tornados too. The tornadoes rip the US flag off the house and drop it on the roof or somewhere in the yard. The same is true for the progress and pride flags at the church–we find them a few months later.

Aside: During the summer in Death Valley, a heat-low forms when the low spot reaches about 120F daily highs. This heat-low then pushes all our rain away for the summer–Seattle still gets the rains. This continues until Death Valley cools, usually in October.

Returning to the narrative, I spent the morning writing the blog and having a breakfast of a banana and 1/2 a muffin that Corwin bought and left out. After that, I started to sort all the remaining books and put some in the repaired bookcase. There is no room for everything, but we did dispose of a considerable number of books, and so there is more room.

I will not miss most of the books we gave away to GoodWill as I found I was reading the primary sources. So I seldom enjoyed the Time-Life books on ships and encyclopedia-like books as the information there was already in Wikipedia, more complete there, and had better pictures.

Glenda, Susie’s Aunt from North Carolina, continued the archeological dig in the pantry and organizing and cleaned the kitchen.

Also, I have kept all the books on the Battle of Jutland, as I have been fascinated by the narrative change to a hundred-year-old battle. You would think we would have had a correct story on this battle, but the true narrative is just coming out. The 100th anniversary of the 1916 battle brought out quite a few new and highly researched books, including a careful study of the wrecks of the ships lost in the encounter of fleets. These books contradict the official narrative, including one official American written definitive (less so now) account.

I have a collection of books from around 1926. These books help write Call of Cthulhu Role Playing Game adventures, and I even use them as props for the game. I have, for example, the Green Book, Volume 1, 1925, which was an annual list of driving routes on the US East Coast. It was used by drivers who needed to visit towns before the interstates existed. Most of the books are hard to find; those I have kept are close to being primary sources.

Back to the story, I started to reload the bookcase, more work than I expected, and we then had lunch from the leftovers. I remembered the other half of my Ruben sandwich and reheated it. It was still delicious.

We soon were going to Forest Grove Rehab and Care Center at 3900 Pacific Highway, Room 44A, to find Susie in bed resting. Apparently, she had multiple therapy sessions that morning. Excellent. Terry, Susie’s roommate, said they worked Susie hard. We chatted with her for a while and then called Leta, Susie’s mother, on my iPhone. Glenda and Susie talked while I checked in with the nurses; Susie had constipation again the night before and was in some pain. Once the obvious was done, the issue was naturally solved. 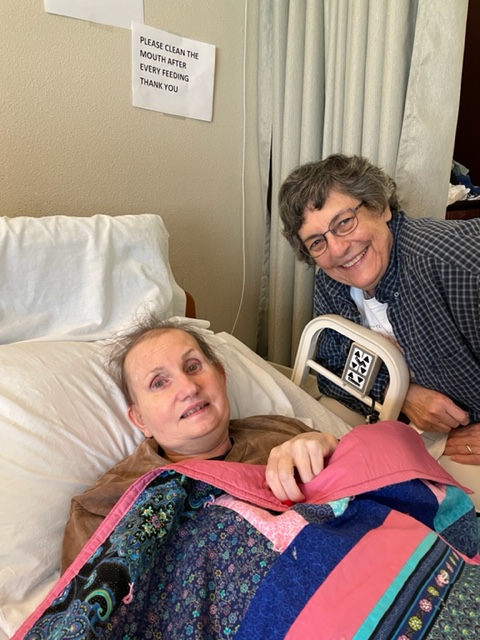 We headed out as Susie started to yawn. She was reassured when we said we would return on Wednesday. Susie is still scared she will be left there for multiple days without visitors. I can’t blame her; it can get pretty lonely in those rooms.

When back at the Volvo Cave, I continued to put books away, and Glenda started dinner after cleaning and organizing some more. Lentil soup with the ham and ham bone from the ham we baked earlier. We then covered it and went to the movies.

I wanted to see the new Harry Potter world movie, Fantastic Beasts: The Secrets of Dumbledore. We got tickets and drove to Movies on TV Regal Theater. The film was about 2 1/2 hours with the previews. I liked it, but the movie’s start was difficult for Glenda and me as we had to reconnect with the new characters and plot. Usually, I would read the book and then see the movie for Harry Potter and would already know the story and the characters. With this movie, you have to reconnect instead and remember the plot from the previous movie. Eventually, the characters become familiar again, and this movie had some entertaining moments involving moving like a crab-scorpion to be less threatening. I also liked the ever-expanding donut trap, which harkened back to the trap in a vault in a previous Harry Potter movie. Glenda liked the movie. I would say that the critics are wrong; it is a fun movie–but the reconnecting is hard and distracts from it. It is also running a checklist of things that need to be covered from the previous movies, which also distracts a bit as you have to remember the connection from a few years ago. Again, I wish the books would come out (I miss reading them), but as a fan and having seen every movie, I recommend it, but you have been warned about the reconnect issue.

We took Air Volvo to get home, reheated the soup on the stove, and cooked some veggies in the new microwave. All of it was excellent. After that, Glenda started cleaning, and I went to read as if I was tired. We went to bed about 10ish, and I was asleep before midnight again.