I have been hearing of late all of the negative things that social media brings us. And as a Democrat and a liberal, there is a lot that is created in social media that makes me angry. But I am uninterested in how folks extract a form of vengeance on the world with social media by spreading hate and misinformation, instead, I like the cool things.

I just purchased from Sparkfun the coolest break-out board. It is a lightning detector. This little board can be listened to by a microcontroller. Can’t wait to try it out.

On social media, I also learned that there was a Tesla Company behind the Iron Curtain (see TESLA) and that gave me an idea for a display for the board. You may remember that Telsa was known for his lightning causing projects and so I want to create something that lights up with detections and maybe glows a bit when there is lightning or electrical noise is in the area. 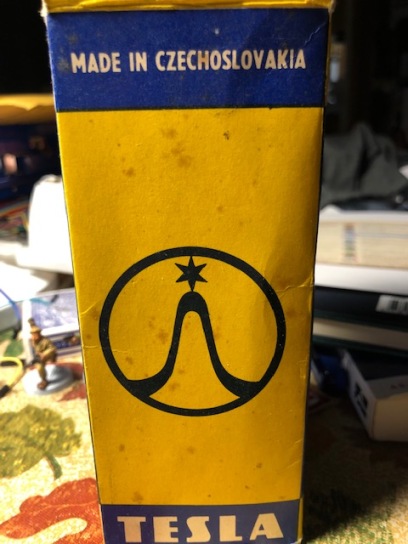 So on eBay, I found that for under thirty dollars I could get some original and spooky looking Tesla vacuum tubes. The box looks so nice so I will have to find a way to incorporate some of the logos and art into the project. The tube is a power rectifier tube and is not likely to be of much value as this is now done by a tiny and safer component; I have no guilt in finding a new decorative use for the vacuum tube. I have carefully cut open the socket, avoiding breaking the glass and releasing various toxins into the environment, and now I can mount a NeoPixie (see NeoPixie Adafruit) to light the Tesla tube from the bottom. I can make it look like it is actually turned on (I will not supply actual 6V AC to the tube to heat it–I have found the manual for the tube on the Internet and know how it works and what it was used for). I can also have it produce various colors. I plan to mount another on the side to produce more lights.

So my plan is to reuse the tube to look like it is a Tesla device detecting lightning and electrical noise. I will slowly light the tube and flash it a bit when it gets noise and brightens it when the lightning gets close. I will add a small digital display to show the distance from the strike.

I have purchased tiny, pin-head sized, micro LEDs from Evans Designs. They make lighting kits for train models and other uses. I saw these on a build video on how to build a SciFi model on YouTube. I might be able to add one or more of those to add a bit of flash. The train guys have all the best stuff! I will also use some polyurethane to mount the tube in a transparent ring, again you get this from the train guys at the local hobby store (for me Tammies Hobbies).

I try to make something interesting as a Christmas present to various geeky friends. Last year I gave out Karl Marx 0-Euro notes (see Karl Marx 0-Euro). This year I will give my friends Telsa’s! Social Media can be so fun!

I will write up the build when I get it more together. I hope you like this more “Maker” write-up. It was what is on my mind today.

2 thoughts on “Social Media, The Other Tesla”