We got up on time, and everything has gone well. We were up before the alarm–sleep was fitful for both of us as it was unfamiliar, hotel room. We were dressed and at the front desk in time to get the shuttle that was running late for the earlier time of 4:40 at 4:55. We left, and I saw folks running after us–the driver was not stopping as he was full. That was the group for 5:00! Pays to be a bit early in PDX.

We got dropped off, and we did the usual things. Being first-class makes everything easy–that is why I picked that for this trip. I do wonder about our international flight to Amsterdam, which is the economy class will be like. But that is in December so I will worry about that in a few months.

Here is Susie as she passed the security check. They decided to just do the metal detector for her. No issue for me.

We got to the gate about the same time as sunrise:

And being PDX, there was always something odd:

We got our seats changed to be next to each other. So we spent four hours enjoying first class and breakfast served at 30,000 feet. On this part of the trip, I read a paper translated (mostly) from German on how to use LED to detect radiation. I want to detect particles caused by cosmic rays, so I am curious. It is interesting as the trick is not to identify the particles but to be able to amplify the signal so it can be processed as a digital signal. Susie read a book by Nora Roberts. Yes, I did nod off a few times, but it was not the content.

Our connection to Chicago was short, 35 minutes, and they had the wheelchair waiting and everyone on the plane waited for Susie, and they were very supportive. The gate was five minutes away. We waited twenty minutes to board. I resisted Nuts on Clark shop with really good looking popcorn. It is Chicago after all. All that Cubs buckets overfilled with popcorn.

A nice guy in a suit exchanged seats with me to allow me to sit next to Susie. The next flight was just popcorn (!) and drinks. I got the Internet working on this one buy paying for it (growl).

We are landing soon in NC. I have to find a car there.

We met the same team that helped us last time here at Charlotte Airport. Last time we ran the whole length of the airport. This time we only need the bags and to get the rental. Still, they remembered us, and we had a lovely time getting everything and leaving the airport. They are really nice and good at getting you where you need to be.

Turning to the drive, I feel few things will take you out of your comfort zone like driving a car you never touched before in places you have never been and not really knowing how to get to where you are supposed to be. I seem to get this deal a lot. So far, I have not hit anything or broke anything. It is crazier when I do this in Europe, but NC is not Oregon. I saw some aggressive driving: Oh, how I miss that. I watched some passing by intimidation. And I had trouble not going over 80 in a 55 to keep up with traffic. Yes, I did wear away my be polite PDX driving just a tiny bit and cut one car off. It felt so wrong and yet…

After about 2 hours and a half, we reached the town and found a funeral home in Ashville. Not right. Drove right by it, Brook-Howell. Found it. Checked in and waiting to hook up with Susie’s family. Everyone headed to rest and so we will assemble in the morning.

We are staying in the guest apartment. This appears to be assisted living directed. Here is a view: 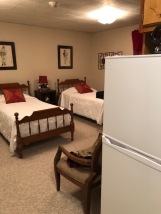 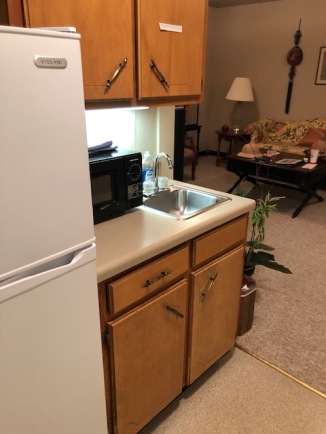 So starting again about seven in the morning (4AM PDT!).