I have returned to the Hollywood Theater again. It is day 2. I started with a set of short films. The Critters was cute and funny–something unique to this form of horror. The jokes are good, and then you scream! The Hidebehind was scary for me. A man lost is suddenly haunted by a tree spirit that disappears behind trees only to reappear and harry the man again. I hope I won’t get worse agoraphobia–a still night in open spaces still scares me. Too many tornados in my childhood. But all were good. I thought one a bit long, Lane 9–but still not bad. It made a bowling ally creepy. This was used in the movie Constantine too.

Then the live H.P. Lovecraft Historical Society did a live version of the story Lurking Fear. They crowd supplies some of the sound effects. It is good fun and so well done that you can’t help enjoying it. 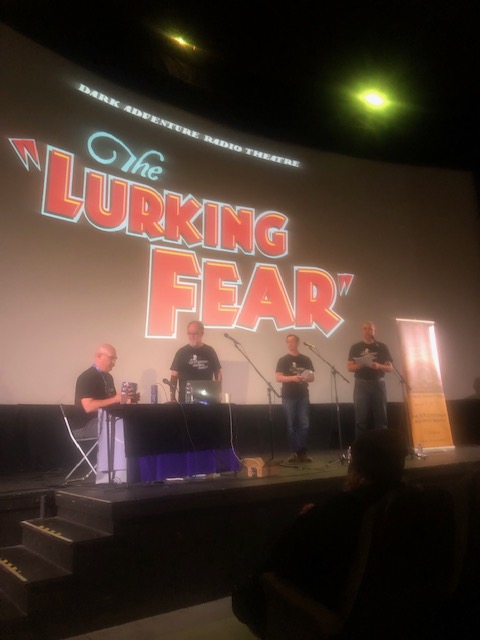 I also picked up my Kickstarter items. I helped fund the festival and get a few items.

Here is my Shoggoth sample (not my lunch!).

I had a long and chaotic lunch next door to the theater. The tables filled as us from the festival came in. There was one waiter! I got my order in, and it came in a slow thirty minutes. The guy next to me never had his order taken and took-off. It took me thirty minutes to pay. One group started clearing tables for them.

I sat next to a friendly couple from San Fransico who popped up to attend the festival. They have been going to these horror film festivals some time. Apparently, the California one is no longer happening, so they attend the Portland one.

I then listened to Victoria Price give a very uplifting keynote after getting seated in the theater again. She apparently finds that the horror fans are the kindest fans. Ms. Price finds it a pleasure to share her father’s life with the fans and doing horror conventions and leading tours. It was an inspirational talk with a horror fan audience. She got a standing ovation.

The next movie was one I knew staring, of course, Vincent Price. I stepped out and headed home. Stopping by to thank Victoria again. I also thanked Brian, the festival director who I often support in various Kickstart campaigns.

Got home, and Susie and Corwin decided they wanted, eye-rolling allowed a movie. And Susie wanted to see Joker! Oh my!

So we got the 10PM showing. It is a fantastic ride and too dark for me–but maybe it fits the current over rev-ing times. I cringed when the soon-to-be-joker could not get his jokes off–I never even noticed when I forgot I was watching a movie. It has been a long time since I felt like a movie put me into the story as a witness. This was no super-hero comic book guy with cool powers that we just there. This was stark and painful to watch. Maybe one of the best movies for this dark type material ever. Again, not a kids’ film and very dark and painful and immersive.

I will not return for the third day of the festival as I have much to do, and Susie misses me.