A quiet day. Slept in late.

Rev. Ann Weld-martin called this morning, and we practiced more Zoom. I have agreed to be on Sunday at 10:30 AM to be tech-support for her first worship service by Zoom. My church meeting is with Joan Goldhammer at 2PM on Sunday, also on Zoom.

I managed to charge and light up my practice circuit with my supercapacitors. My more expensive and higher voltage supercapacitors (going from ten bucks to twenty bucks) worked better–no surprise (generic China make-up versus German made). I did notice some instability as the voltage went down. I then added a decoupling and a smoothing capacitor (for those who know what that means) from my general supply to smooth out the output power to the light. The light then just slowly went out instead of blinking on and off.

I should point out that I decided a few years ago to create my own supply of components and equipment for building low power circuits. I purchased not one capacitor but all of them in kits–it is cheaper to buy them all than just the ones you need. I have sets of transistors, diodes, resistors, wires, and LEDs and even displays. I have proto-typing PC boards and plenty of breadboards ready to use. I purchased rolling tool drawers units and filled them full of parts. I have my own “Radio Shack” in my garage.

Returning to the story, so yesterday, I built a resistor and bar LED into some jumper wires so I would be able to visibly watch the supercapacitor discharge. This was from my supplies.

I am trying to build a mini-sub to run in a fish aquarium. I want it to carry a spy camera so we can see inside the tank. The main issue is power and the safety of the power source. Currently, my microcontrollers all use LIPO batteries, which would explode spectacularly in water.  I also want to do the same thing in a rocket and again the batteries would not be something I would want to fly (the batteries explode if shorted or overheated).

So supercapacitors seem more reasonable. But as capacitors, they drop voltage fast. That would play havoc with a DC circuit and a microcontroller. I was hoping the adjustable boost regulator from Pololu would be stable, but it is not working.

I have ordered new parts with a set voltage, 3.3V, and 5V. Pololu is still shipping and struggling to operate in the current locked-down world. I have marked the order as non-critical and they will ship it when they can.

I have ordered smaller supercapacitors that I might string together from Mouser. Again, the order is not rushed.

The song for the day is something we are trying not to cause: Smoke on the Water.

I made Michigan Chili for dinner, again. I also made cornbread muffins to go with it. Never used the Women’s Bean Project cornbread before. Susie thought the muffins tasted like Frito Corn Chips. She liked it.

The Women’s Bean Project was the only place I could order bean soup kits on the Internet. Bob’s Red Mill and all the others were sold out. Safeway had none. It is not just toilet paper that folks are hoarding! I have now learned more about the organization and now enjoy the cornbread even more. Order from them and create jobs for people. 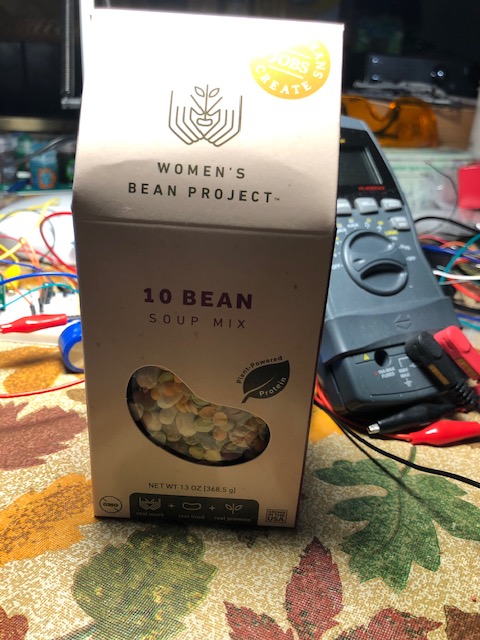 (this is the soup package and my electronics behind it)

Corwin and his friend are here and we played Architects of the West Kingdoms board game. I taught the game and it was a learning game. They did catch on. It was a close game.

I also joined a Kickstarter to upgrade the game parts: Meeples Kickstarter.

I also did the laundry. The towels and whatnot are stacked in a chair. I will fold it later. Everything else is hung-up and put away.

So that is about all. I am feeling a bit better today and not as tired. I think I will sleep in one more day.

It was reported that more than five hundred people died today in the USA from the virus.

A hymn for today to remember all the people who died today: This is my Father’s World.