Back to working from home. Many video conferences and status updates and even some thanks are given. Not a bad Monday.

I was disappointed that Krispy Kreme now does not deliver here. So I could not have their donuts this morning. They changed this–we were able to get them delivered last week.

I made my lunch instead of ordering it. I started baking some potatoes while listening to meetings online. I had a baked potato with the fixing and Beef Vegetable soup for lunch. Susie had the same when she got going.

Usually, Susie has a hair appointment and nails on Monday. Oregon closed down all hair places. Susie’s nails look good still. I will do them later in the week, instead. I got the supplies last time Susie was ill and did her nails.

I took a walk. I get stiff from sitting in front of computers.

My last meeting was a project Zoom meeting; more than three hundred people.

So today’s song is a crazy song: Veteran Cosmic Rocker.

We made dinner, the first day when I ordered nothing from outside. We made grilled teriyaki chicken fettuccini. Corwin grilled the chicken, and I made the pasta and sauce from a jar. It was good.

Monday is Dungeons and Dragon Fifth Edition on Roll20. Bill, Cory, Corwin, and Mike logged in, and we played from 6:30 until 8:30 local time. Bill is in Central Time. Again, the challenges were difficult. The fire elementals hit pretty hard. They finally defeated all the cultists and drove off an evil Ginni to reach the final nexus of power and evil. Only to be stopped by a dragon! It seems the dragon want to negotiate. We will pick up there next time. This is all part of the content you buy to play from Roll20 and the makers of Dungeons and Dragons.

I also ordered some more electronics from Denver. I received a nice note from Pololu that my order is on the way. They thanked me for asking for no rush and for supporting their business. They make very useful robot parts and electronics. I am decided to build a flashy device that is supercapacitor powered. I ordered parts from Sparkfun too. No rush.

I built some hats for the Portland Makerfaire two years ago. I helped run a booth that year (in the rain). 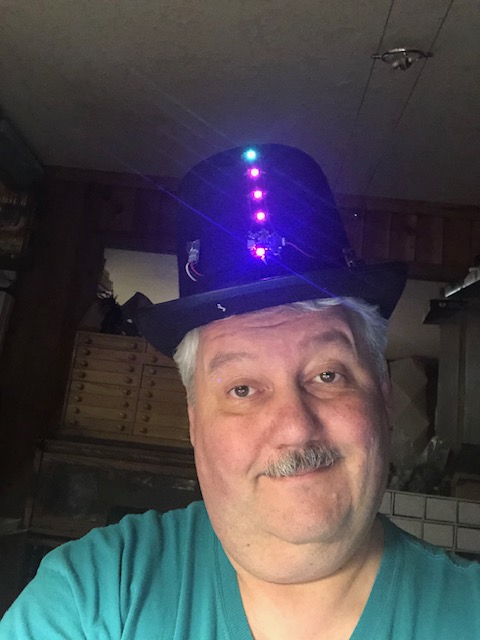 (Here is my rechargeable top hat with lights that detect sound and change colors. The hat is showing a level three sound–loud).

The financial news contains more panic about liquidity, but the stock market went up again. The flight to dollars has stopped. Gold is becoming quite popular again. It appears that the actions from all The Fed and other Central Banks worked so far.

Today more than five hundred seventy people are reported to have perished from the virus. Today’s hymn: God Bless America.