This will be my shortest update.

I was up at 2AM and 6AM working on a computer problem.

This was followed by meetings all video conferences.

I am very tired.

My books on Elric are here today. I have already finished the first part of the first book. I forgot how much I liked Michael Moorcock‘s writing. I will go back to read some more soon. My favorite Doctor Who book is by Michael Moorcock–Pirates sailing solar sail ships in space: The Coming of the Terraphiles.

I had soup and garlic bread for dinner. I ordered from La Provence a Tuna Melt sandwich. Susie is having the French Onion soup that came with the sandwich for dinner. It was delivered.

I managed a walk today. The flowering apple trees are always bright in the spring. The apple trees here are very old and from the original farm that became all these houses. I have one, partially fallen, in my backyard. We would call these cider apples when I young in Michigan. Here is one near our street. It is planted in a straight line with the other Apple trees, a memory of the original orchard. 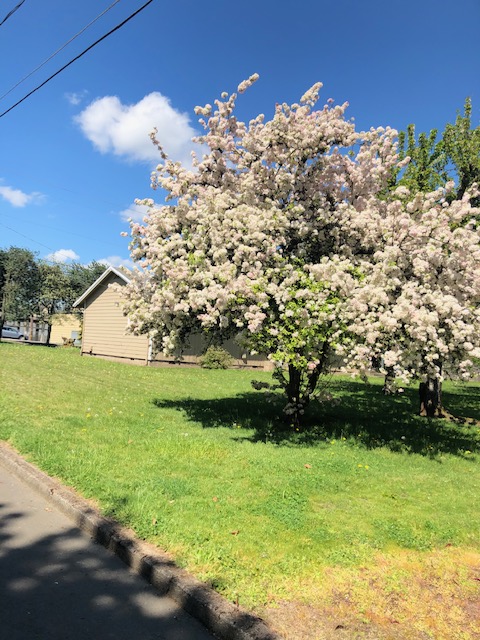 The Reedville Elementry School will not open until the fall. I walked by and miss all the noise and bustle of the school that is just a block away from our home. April should be the beginning of wrapping up the school year. The school wrote on their sign that they miss the families. They have food boxes for pick-up on Monday’s for folks who need help.

Tonight was also Dungeons and Dragons 5e online at Roll20 and the continuation of The Tomb of Horrors with my four players with eight-level characters. We played for just an hour and a half as I was so tired, and the adventure has a false ending that I managed to fool them with. We will start next week with them no longer fooled and a bit wiser (and ninth-level). Actually, Bill, one of the players, said he was happy that his imagined character did escape the legendary adventure with loot. Next Monday, the adventurers will again descend into the Tomb, knowing that they have the deadliest parts to come.

Oil did an unexpected thing today; it went to negative values. There is no storage left, and they are pumping it still and not refining it. According to the reports I watched, you cannot store oil for long and refined products age fast. Oil is priced by contracts, and apparently, investors sell the contracts before delivery except for today. There were no buyers this Monday, and the price crashed. Literally, you cannot give oil away, you have to pay them to take it. Once again, the price war and the virus at the same time have brought ruin to oil producers.

The stock market fell a bit today. At first, the USA market was fine and Europe closed up. The sudden and unintelligible stupidity it took to drive oil to negative prices confused the USA stock market, which fell more than two and a half percent. Just head shaking from me.

The reports show the virus took just short of two-thousand American lives today. There was also a mass shooting in Canada. We remember who we lost with an old hymn: Sweat Hour Prayer.