So today was another workday at home. I had a couple of breaks but I did not get out of the house today. I was working until about 7PM with a few breaks. The big project I am on had an announcement that they are changing some leadership and processes and goals. Much of the information was too high-level to follow. We will get more detailed information later.

I called Nike support in India about 9:30PM and asked for some more help with an issue. I then made some changes so they could finish their work. I think it is fixed now. The world is flat for me. I am where my laptop and phone are.

Returning to this morning, I ordered lunch from Gyro House. I had a Lamb Gyro, Corwin had an Iskandar Plate, and Susie had soup and baklava. It was delivered without issue today.

Dinner is from Olympic Provisions. I ordered a subscription to their meats. Yes, you can get a subscription and have them sent every other week! We get a chef’s board every two weeks. So today I got out crackers and cut up sausage and other meats and that is dinner. Snacks! 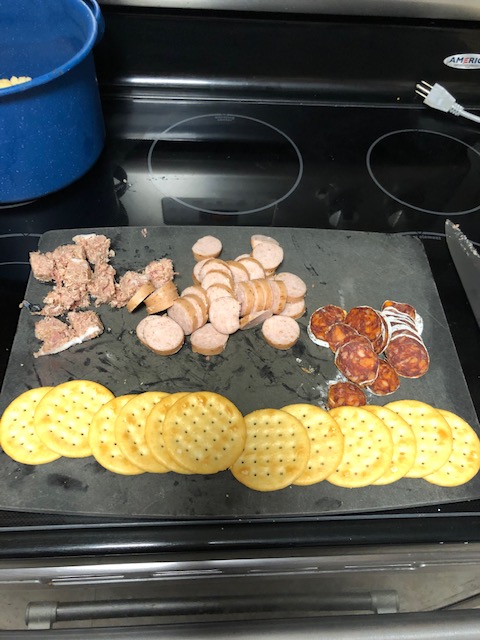 I played more Blitzkrieg in the West today once I could get work to stop. I had to figure out the air combat and bombardment rules! Oh my, that is a lot of rules and complexity. It is also abstract. Once I had the air missions set, I could start the Axis turn. They get “Sneak attack” and other harsh starts to the war for the Allies. I managed to bomb Belgium with some success. I managed to do nothing bombing Holland, which I invaded (it was optional). In my first attacks, I did destroy half the Belgium Army (I had some tanks in one place) and an infantry unit from Holland. My airstrikes eliminated already 20% of the Allies’ air support.

I have learned as I play that the German Army deployment is wrong. I needed to keep the armor and mech units together, and my airstrikes made no sense. The German Army is not breaking through Belgium as fast as I expected. The combat tables want a 4-1 or better to get good results for the attacker. I did not again have the armor and heavy infantry in the right place to get that. I had some “attacker withdraw” results!

(there is a lot less orange on the board now)

The Allies counter-attack will be tomorrow. The French and British west forces (not marked as entrenched) will move into Belgium to stop the German advance. I might play one more turn. I think after that, I will put it away as the set-up is long and without more direction from the game designer requires too much-specialized knowledge to play. I have already learned much from the game on the details of the battle. I might get it out again someday; the detail work impresses me.

But don’t lose heart readers, I have another game that is less complex on WW2 to try out from the same publishers. A lot fewer rules! It is the whole war in Europe in hours of play.

The stock market when up and down today. Nike stock was down today. I read reports that the New York State Pension Fund sold all its holdings of the shoe company. I think I read that the pension fund used the proceeds to buy Über and Lyft shares.

The reports are that more than one-thousand six-hundred Americans died from the virus today. This spiked from the previous days and these numbers are following the same pattern for the last three weeks. Thankfully, the totals are below the previous week’s numbers. The total cases graph has developed a negative slope suggesting we may have passed the peak.

Something bright and fun to celebrate that maybe the USA peak was today: YOU’VE GOT A FRIEND performed by the worldwide cast of BEAUTIFUL (in quarantine) for The Actors Fund. It may not be the peak, but I will take any chance to celebrate!

One of my favorite psalms: Psalm 121. We need to remember the millions ill and slain and all the medical workers who are their witnesses. And not to forget the pain of the families suffering from the infections and its aftermath.