I had my meeting at 7AM for a council I help run for software development in the USA. That is a chance to do the Powerpoint presentation and work with my very talented friends from SAP, Peter Keller, and Goodyear Tire’s Todd Lutz. We talked about test data–are you still awake reading this? I then had endless video conferences in the afternoon, but before those started, I had two more hours of video conferences on mostly status. I managed to actually get work done while the status conferences were running. I had a short break and slipped out to do some grocery shopping (I used up the coffee today).

Safeway had new challenges. Meat is becoming expensive, and only two packages are allowed for purchase per customer. There was toilet paper (we have not yet exhausted our supply) and I picked up a double set of paper towels (we have exhausted our paper towel supply). Back months ago, I bought toilet paper in each of my three orders online to Safeway before the lockdown. This was when the virus was beginning to hit in Oregon (the first cases were here in Washington County). Then, I just repeated much of the order not even noticing I was starting a trend on toilet paper purchases. Safeway online stopped having delivery windows and I have not been back to the online website, but we were full by then.

I picked up some ribs, Korean Cut (as I call it) across the bone. I got milk, eggs, butter, and so on.

Lunch was from BJ’s Brewhouse. Sorba noodles with chicken for me. Potato skins with cheese and bacon (I removed the green onions before Susie saw I forgot to exclude them, again). It was delivered on-time and without error.

The meeting and video conferences ran over until almost 6PM. The last was ninety minutes on a discussion (argument) about interfacing data. I had a beer after the workday ended. I will be checking my retirement balances again.

Corwin did the teriyaki soak and broiled the ribs. He had to start dinner as I was stuck in the argument and could not start dinner. I had to put the arguments on mute a couple of times to talk to Corwin about making dinner. I do not think anyone noticed.

Susie was happy with dinner. It was quite good.

Corwin discovered Olympic Provision‘s subscription service after we had our first delivery yesterday and convinced me to put it in a larger order. I agreed to invest some of my grocery money into their website to have more food sent. Corwin thinks we can have a couple of dinners from the package. It is a good experiment for the times. We may eat very well, it appears not to be that expensive.

I did put away Blitzkrieg in the West today. Here is a summary of my solo game.

I managed to get through two turns. The Allies’ counter-attack after the initial Axis attack had not done much. The German Army crushed the Belgium Army, and the armor and mech units encircled the French that had reached the front, and much of the French 2nd Army was destroyed. The Luftwaffe owned the skies. The unprotected Allies’ airbases were destroyed by airborne units and special forces. There was a four-kilometer hole in the Allies’ front. The last of active resistance ended in Holland, too, with the encircling and crushing of the Dutch forces.

And then luck turned on the Germans. The French heavy infantry reached the front with the light armor. The combined arms blew out the German best infantry. Feeble attacks performed miracles and sent the German units flying out of Belgium and back to Germany! The German forces were on the run!

And there I stopped. Germany would be not break-out as the deployment was just wrong from the start. It would be a slugfest with France attacking everywhere in two turns to find the weaknesses in the German lines. 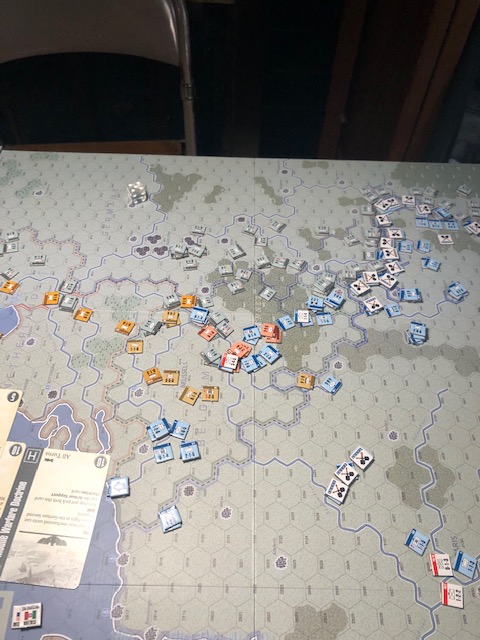 The game was hard to learn, but the turns play fast. The rules begin to make some sense to me after a few practice turns. The combat tables require 3-1 and 4-1 odds to have a great result. The result that has you roll a die and retreat that far is rather shocking and undoubtedly unrealistic. Units do not retreat twenty kilometers through a forest! The stacking rules are too crazy, and I just set a two-unit limit except for minimal units that could be added in. Encircling is required to crush the other army.

Every unit lost is a shock point, two for armor and mech. Losing cities and fortresses are more shock points. With the loss of cities and army Belgium would fold. I think the Dutch would also fold (collapse in the game turns). I learned a lot about running the 1940 front. The shock rules are an exciting new idea.

But, the set-up is long, and I still do not know how to deploy the armies. The rules are very complicated, but that is the nature of this type of simulation wargame. Not sure I could find anyone to make the investment to learn and play the game. I have better games, but nothing that is such a good simulation of WW2. Hummmm…

The reports have more than one-thousand seven-hundred Americans killed today by the virus. The charts are still showing a reduction in infections and deaths.

The song I picked is from the Sacred Harp and is from Charles Wesley. This is a very old style singing with shaped notes and not for everyone: Sacred Harp Singers – Idumea (with lyrics).