Today I returned to the original number count, I changed to the new numbers thinking that phase 1 would actually be followed by phase 2, and we would unlock. As we are now under a Federal siege too, it is time to believe we will do this lockdown thing until next year, and thus I have returned to the total count.

Out naked protestors are at least making international news. Portland, and the greater area where I reside, is not just weird. It is hot! The medieval reenactor protester photos also got some play.

Please understand here in Oregon, we believe in publishing all the bad news. It stops people from moving here. Remember, in the 1980s, the unofficial motto of Oregon was, “Come, Enjoy the Great Pacific Northwest, GO HOME.”

Now, the Federal End-of-the-World style intervention starts here. This is not really a surprise as Oregon has legalized weed, used only by-mail elections, and is part of the liberal triangle (Washington and California being the other states) where Federal authority disappears like a lost plane in a SciFi picture. I like it here.

Leaving our dystopian holiday and turning to my day, it was hot today, and this Monday, I slept in until just before 7. I started with emails and text and just helping and listening all day. It seemed to be an endless status day on Zoom calls. I just did work while I heard the status reports.

I once again forgot it was Monday, and Susie has an appointment for hair, fingers, toes, and various other items at Zerida. Her driver called, and we had 15 minutes. My colleagues on a Zoom call got to watch me, there were a few laughs, run past the Nike laptop a few times while we got Susie ready. We made it, and Susie was whisked off for her appointment taken by her driver. All masked and careful.

After Susie headed out and I cleared a few more Zoom items, I ordered some Vietnamese soup to be delivered. Taking a short break for soup (extra meat) and then back to enjoying more Zoom, emails, and texts.

I made dinner tonight. Schwan’s Chicken Cordon Blu with freshly masked potatoes and canned peaches. I made Hollandaise sauce to put on the chicken. It seemed good.

Returning to the dystopian bad movie we seem to be in here in the PNW, so far Arnold has not appeared at my front door saying, “Come with me if you want to live.” Or Bruce Campbell showing up naked with a chain saw. We do dystopian weird here and all those actors do live on this coast. I have high hopes for more weird.

Obviously, it is time to find some non-political or upsetting news or weird. Lets look at some pictures from the backyard.

My apple tree is huge with fruit. It is a bumper crop. Usually, I give the apples to a friend to change them into wine. If things continue on the dystopian track, I will be buying fermenting and distilling supplies from Amazon! 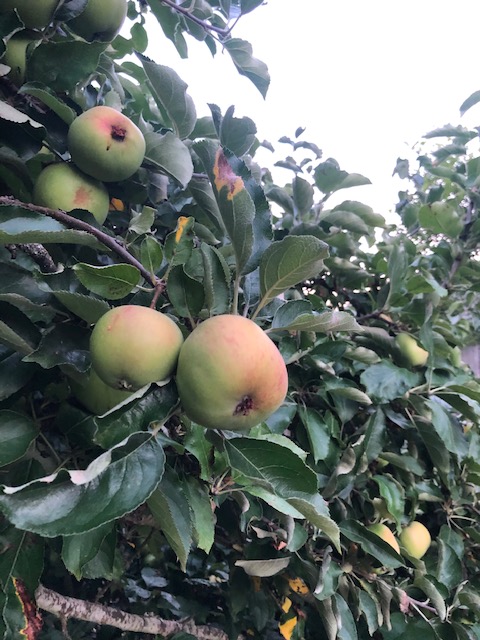 My leeks and onions, I let go to seed. I discovered too late that I like leeks, and they grow here in the winter. Hmmm maybe. 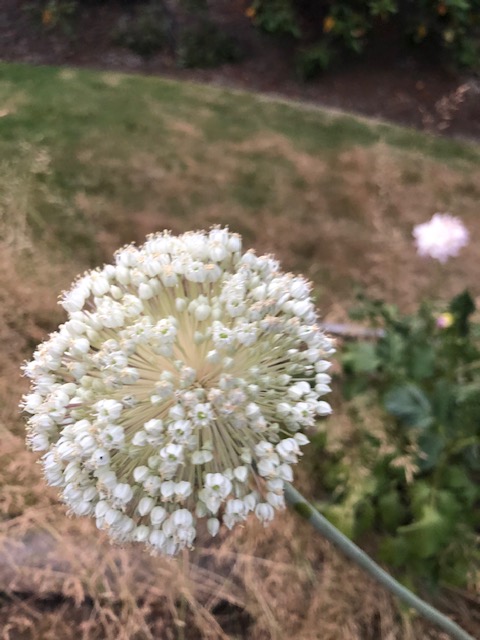 And a view of the deck is not too bad. It is currently Corwin’s blacksmithing lab.

Not in the photo are blackberry bushes that are massive. I suspect I will have to get rid of them someday.

I fell asleep as I am still tired from some lost sleep, but woke in time to write.

The market was up. The virus inoculation companies flying high. Much of the discussion on Bloomberg, I listen to Bloomberg between calls, and while I work from home, it was about new stimulus packages and going-back-to-school issues.

The reports are that more than five-hundred forty Americans fell to the virus today.

I am repeating some of my favorites: In the Garden. It is a good match for all the news today and the pictures.