I am working in India and USA time on a critical path software install and upgrade. I nap with the phone under my pillow, and it beeps when I get a text from a co-worker who needs me to wake up and do something. It also beeps for some meetings and other notes from CNN. So I get to sleep in between beeps.

Susie gets worried when I work so many hours and has to put up with grumpy Michael. 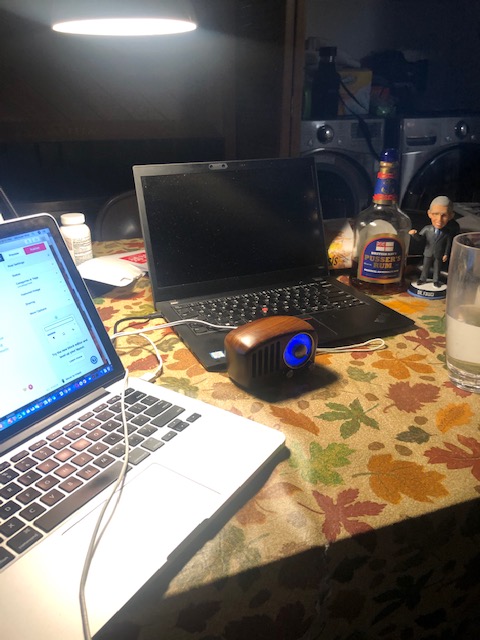 I am right now between on-shore and off-shore times, and the systems have database upgrades and back-ups that will take hours. I expect about midnight to 2AM I will be back in action and ride the clock all the way around to Tuesday morning.

It is a difficult mission, but we are building staging for the go-live in October. This is the preliminaries to cut-over, and I have worked for more than three years to get here. I will give up a few nights to check-off one more big step.

So found breakfast around 7ish and got cleaned up and dressed by the first meeting. I continued to attend the Zoom meeting while also working issues and fixing processes. I was confused at one point and called a time-out until we call communicated what was happening. We got aligned and moved on.

It is Monday, so Susie has various hair, nails, toenails, plus appointment with Zerida. We managed to be ready by 10:45ish when her driver got here. I have to stop what I am doing on Zoom and mask-up and get Susie to her driver. Often I forget to turn off the video. My colleagues are then watching me suddenly running all over and masked up. I get a lot of comments.

Turning to lunch, I purchased pastrami from the local butcher, Ponderosa Provisioners, and today I made a sandwich for lunch. This kind of meat, however, requires thought. I take four slices of the peppery beef and lay it on a microwavable plate and microwave just enough that it is not cold anymore and just starting warm-up (twenty seconds or less). I take some bread, one slice I carefully spread a smear of olive oil on the bread–very light. I then scoop a 1/4 inches layer of coleslaw trying to avoid excessive liquid on the oiled bread–the oil will protect the bread for a while. I then quickly spread a small layer of Thousand Island dressing on the other slice. I then layer the pastrami overlapping over the dressing. Switching sides for each slice creating that look you see at a deli of loosely folded meat. Then, with some dexterity, I quickly flip the meat and bread over the coleslaw. You then take out the big knife and cut the sandwich with flair in half while imaging yourself at some deli. Service quickly before the coleslaw melts the bread. Perfect! Pickle and chips if you have them should go with the sandwich. I had sweet canned peaches in a bowl.

I continued to work and take a nap and read a bit. I am really enjoying Lovecraft Country and its mixture of Lovecraft style horror mixed with American black life experience in the 1950s.

Our diner is Happy Panda delivered. I order Susie’s favorites and appetizers. Susie never got passed the appetizers. It re-heats well. But, I have deli-style roast beef from Ponderosa Provisioners for another sandwich. It will be a hard choice Wednesday.

The market was up some today. Technology, which was out last week, is back in. One of my guilty pleasures is Virgin Galactic, which managed to release pictures of a plane they might build and announced $0 earnings this quarter, and still, the stock goes up. I have only 180 shares, but it is a fun ride! My other guilty stock pleasure is losing money on Ford.

Today more than five-hundred sixty people who had the infection and reside in the USA closed their eyes forever.

I went with a country version of a hymn, Methodist Hymnal #701 When We All Get to Heaven.