Today, the last day in September, I hit the 24th year of working for Nike. It is hard to imagine 1996, and starting at Nike was so long ago. I began in 167th West building, working for the Europe Warehouse group in Beaverton, Oregon.

Susie and I lived for a month in a furnished apartment in The Lakes until we purchased what I know call the Volvo Cave. I drove The Buick back then.

Returning to today, I slept in and got going at 6:30ish, and I then had to rush to be dressed for our 7AM all team, a Zoom call. The call exchanged the usual material for an interview with Mo Farah, gold medalist in track. He was friendly and happy to talk to a bunch of Nike computer geeks about life. That was then followed by Zoom calls, none as cool as that, about various issues and status reports. Tomorrow is the start of the next group of work, a new two-week sprint of work (the turn sprint seemed to have more meaning today after the call with Mo Farah). It was a rush all day to finish.

We also had a Zoom meeting about the history of racism in Oregon and how Oregon was founded as a whites-only state. We continue to discuss racism and how to make things better often by just recognizing the past, often the recent past.

I had a short break and walked quickly to the end of the street and back. My legs are working a bit better today. I think it is a simple use-it-or-lose-it issue caused by too many weeks working from home day-after-day.

I had time to make my lunch today. I cooked a grilled cheese sandwich with tomato slices form the fresh bunch that my neighbors brought over. I had a can of beef veggie soup to go with it.

I close the Nike computer and turn to the website Board Game Geek for lunch on my personal Apple computer. I like to do a full-stop from work and look at gaming videos and updates as a way to recharge. While eating my sandwich and soup, I learned that one of my favorite games, The Grand Hotel Austria, has a Kickstarter for an add-on starting in a few weeks. It is called Let’s Waltz and will likely add some more options to the game and to reprint the base game (it is hard to get a copy). I have upgraded my copy of The Grand Hotel Austria by 3D printing a bust of Emperor Franz Joseph as a marker for government support in the game and buying 3D printed wine, coffee, strudel, and cake markers. In this game, you have to supply guests with goods before placing them in their rooms. I love moving little strudel and coffee cups! 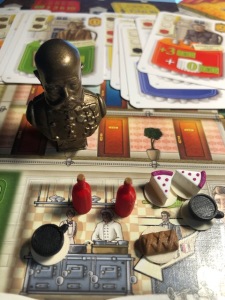 (some of the components; include the bust I made to replace the black square wooden marker)

I had some more coding to do this late afternoon, and I had to read and approve a pile of designs. I rejected one, and it was quickly revised to follow closer to my expectations. I find an argument is easily ended by deadlines and practical requests. I worked until about 5ish; all my tasks are done.

Corwin started up dinner for me, Moroccan Chicken with preserved lemons and olives. I have tagine spices already, so just need to cut up veggies and throw it together and bake for about an hour. I used a dutch oven, but it still works out.

Today the deaths of more than nine-hundred fifty people are recorded as lost to the virus.

Today I thought I would repeat this one: It is Well with My Soul. I think we need that after the debates!