Evan and Mariah met me this Saturday at the Golden Valley Brewery for lunch. I had started Saturday by attempting to sleeping in, but my attempt failed, and I was up at 7ish. I had coffee and a bagel and watch the last of the first season of Game of Thrones. I was surprised by the number of cast members that would not return as their characters died. I have not read the books; so much of the story is a mystery to me until it unfolds in the TV series.

I find that the show has grown on me, but I am not sure I could spend hours watching it. I only watch it when I am tired and on weekend mornings. I think I like British murder mysteries and cooking shows more.

Before headed out to lunch, I finally had some time to paint Richard’s figures. I spent about an hour on them. I hope to have more time on Sunday. I managed to finish the base colors on one set. The other set has plants growing out of a SciFi mech, and I tried a green ink over the dark green on one of the figures. That really added to the look. Again, Sunday, I will be doing the touch-up and some more ink work.

I had a cobb salad, it has their homemade bacon in it, and I like the local blue cheese they also include in the salad. Mariah went with a salad with chicken. Evan had their fantastic avocado bacon sandwich. I forgot my hat and later picked it up. They kept it for me; it was not the first time!

Mariah went off to have her film developed. Her camera, an old Pentax, had jammed. She loves the old manual camera and has enjoyed the good work it has done for her.

Evan and I headed off to Wildwood Tap House. Evan, a beer. I was still tired from a long week and stayed to just one beer with lunch. Evan then beat me at the board game Concordia. We use a few elements for the Salsa add-on. Playing a two-person game that works well with the game. I once again over-focused on building than collecting cards. I lost by six points. I enjoyed the close battle. Me building as fast as I can and Evan collection cards. It was interesting to me that the score was so close.

Concordia is one of the best newish games and is ranked 18th at boardgamegeek.com. You are running a roman trading house, and you are trying to build the most powerful and capable trading family business. There is no war, no armies, just trading posts and colonists. You collect resources and then use them to build various trading posts. Each ancient city has a random resource, with cloth and wine being the most valuable—tools and food with more than bricks. You need to sell goods to get money to pay the cost of the new trading posts, but those same resources are needed for the trading post and cards. This is a deck-building game, and you play a card from your hand each turn to do an action, including an action to get your cards back and be rewarded for using waiting to restock your hand. The cards also control end-of-game scoring, so the more you have, the more you will score (thus my loss to Evan).

The game is a bit hard to learn as the cards and all the relationships of money, resources, and trading posts take a few games to get a clear understanding. But, once you have the clarity, it is a good game, and for every turn, you are trying to make it work for you. Every decision is important, and every trading post built and every card purchased to bring the game closer to the end. When you buy the last card (a special card) or build your last of your 15 trading posts, the game ends after everyone, but the person who ended the game gets one last turn.

We paid our small bill at Wildwood, who were happy to have us at our “gaming table” inside. Most folks were enjoying the patio and the sunny but cold day in Oregon. We headed home.

Susie was ready, and we, Susie, Evan, and I, headed to our first return to a local movie house! Evergreen Regal! We bought tickets and popcorn to watch Raya and The Last Dragon. I thanked Nathan, the guy who sold us tickets and consumables, for getting us our drinks (he could not quite get the right seats for us, but we managed when nobody else came). He said, “I am just happy to be back.” So were we.

The movie is a mix of Mulan and The Last Airbender in my mind. I liked it, but it was not quite the straight Disney production I am used to. This is a fantasy world from a kid’s viewpoint. The best line I remember was from Wong when he describes what he will do with the captured Raya and friends: “It will be so bad it will take two weeks to clean up.” Yes, there were some funny lines in the movie. The sword and fight scenes were, without the blood and gore, fun to watch. I would recommend Raya and The Last Dragon for a good bit of pandemic-forgetting fun.

We went to Mazatlan Mexican Food off of 185th for dinner. They always have good food and drinks. I had a margarita, as did Susie. Evan had a house drink. Susie eats very slowly, and we were there for almost two hours. I drove us home and took a nap. 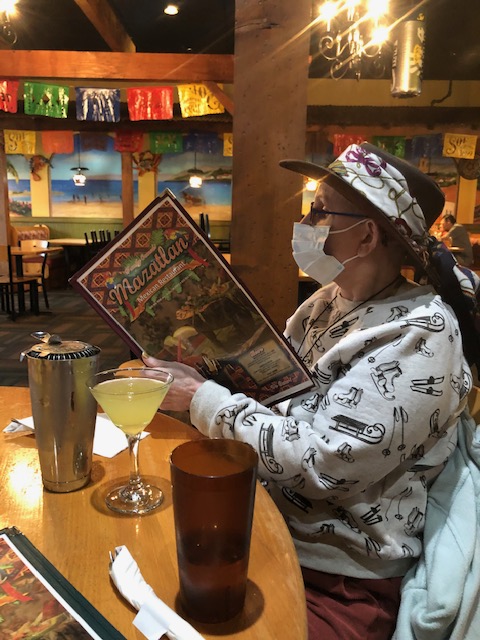 It was a full day. With masks and distancing, it was a busy day like I used to have on weekends before Covid-19 came.

Gov. Brown of Oregon announced that the hospitalization rates stabilized in Oregon, and the surge may have peeked for us. Also not covered by Gov. Brown, there are now plenty of places to get the vaccine shots in Oregon; some are drop-in now.

I went with a fav of mine. Please enjoy this version of Lord, You Have Come to the Lakeshore.