I still found sleep challenging to find, but once I did, it was hard to stop. I was up about 8ish, made did the dishes, cleaned up, had some breakfast, and then headed out.

The 1 train on a Monday was different, louder but everyone wearing masks, and few couples talking close. The trains were full-ish but not overcrowded.

It is cold today, a sunny East Coast October day. I had on my sweater.

I got Susie a donut at Dunkin Donuts. There was a line, and they are understaffed still. Everyone was a bit more intense as it was a workday. 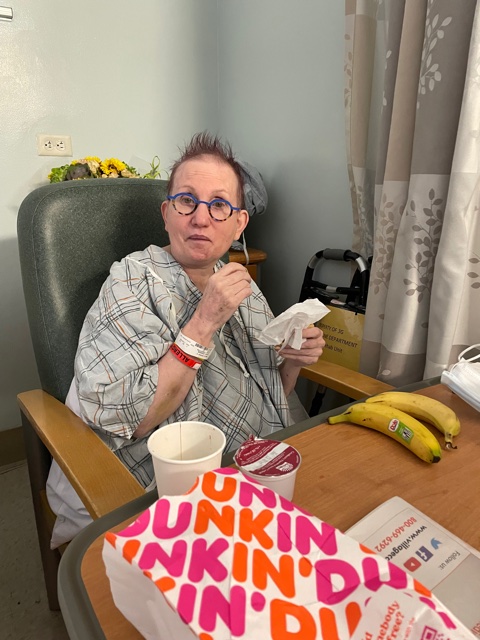 The line to get into the hospital was long, but I knew the process and even directed people here and there. I am slowly becoming a volunteer at Mount Sinai West!

I reached her room and found Susie up, already had breakfast, and her first session done. She enjoyed the donut I brought her. My plans for the day were to travel by subway to mid-town and visit the central NYC Public Library.

Susie had more intensive action around noon. When those started, I headed out as I were in the room alone. I kissed Susie goodbye as I was not sure I would make it back to the hospital that day with all the travel.

Back to Columbus Circle Station. I found the correct B train, with some confusion, as the signs in the subways have a lot of words on them, but it is hard to harvest helpful information from the words. Nevertheless, I managed to reach Bryant Park without incident.

The park is full of chairs and people eating their lunch on a workday Monday. I nearly tripped on an uneven paver but recovered my footing. I almost rolled my ankle. This is not the trip to break one’s ankle on!

I stopped exploring and went to the closest place for lunch, Bryant Park Grill, and sat outside. This is more biz and upscale lunch. And here, the suits had socks that match their ties and adorable gals in designer outfits. I ordered a beer and ignored them, ignoring me, clearly a tourist. 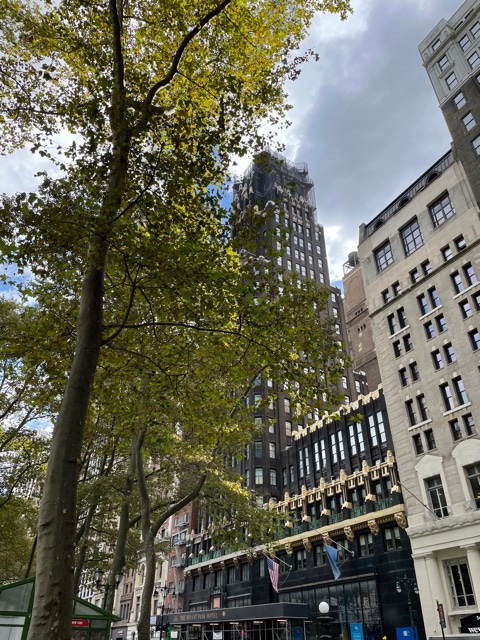 The Bryant Park Hotel looks like it is ready for being the evil building in the next Ghost Busters. You can also see the Chrysler building from the park.

They had confit duck legs on greens. I have always wanted to try those. Thusly, I had an expensive lunch (the beer was $9). After that, I am sticking to water. The salad and the duck were perfect, all fall flavors.

I then walked all the way around the library to the front. The lions greeted me, and I took the required pics.

I walked into the library and got directions to the Guttenburg Bible. I took the elevator up to the third floor and discovered the book was a facsimile. I then went to the 3rd-floor reading room as I was early. I walked into the near-silent rooms and sat down, and got out my laptop. Most folks seated were using a laptop or iPhone.

I decided to write a bit more of my story on Howard, my hero in my ScfFi-horror stores in the library. I just wanted to say I did some of the work in the NYC Public Library. I also found a book in Greek and English on Aristophanes fragments. So I did a little bit of learning on the ancient comic writer. Only a few plays survive, and I learned more about one of the lost plays and how it got him sued by the rulers of Athens. Back then, laughing at politicians was risky business.

After enjoying the room, I could move to NYC just for the library; I went exploring. I found a few more stacks on American History but decided to get early access to the Treasures of NYCPL as I had a ticket with a time an hour in the future. No problem.

There was a real Guttenburg, the original hand-copied Declaration of Independence in the author’s hand with corrections, the stuffed animals from Winnie the Pooh (yes, the real Pooh), Dicken’s book he read from (with hand notes and corrections) when performing, his desk, and Malcolm X’s briefcase. There were lots of other things too. The original voting count sheet from the passing of the 13th Amendment (banning slavery) had a more emotional reaction for me. 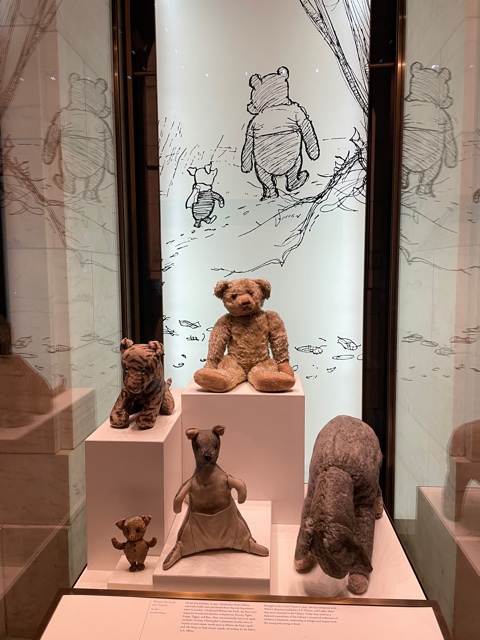 I wondered through this treasury of books and items for an hour. Virginia Wolf’s cane, Mozart’s handwritten music, and Jack London’s flag. My legs, feet, back told me that it was time to head back.

After a bit of searching, I found the subway access after leaving the library. I was surprised as the station should be on the other side. Instead, I saw that this was the tunnel to connect F to the other lines. It is a strange long black line on my map on my phone. It was a long walk underground to the actual station.

I returned via the B train to Columbus Circle, but I left the station on the other side (sigh). I decided on a coffee from the local truck, and then a gal asked me to buy her a cheeseburger, so for about ten bucks, she got one and kept the change after I gave a buck tip in the tip jar to make the proprietor happy. I had not been asked to buy someone a burger before, so I just agreed–it seemed OK to me. The coffee helped.

I reached Susie at 4ish, and she was still sitting in a chair. No lazing in bed in this ward!

She was happy to see me but sorry that she did not see the real Pooh and other items on display in the library.

I stayed through her dinner and left at 7ish. I walked over to Hell’s Kitchen and met Kat for dinner at Der Krung. Slightly swanky Thai place two doors from the Kat Lair. The food was excellent. Mine was a birdnest of rice noodles with a nice stir fry placed inside. Kat ordered the “mild” yellow curry and was at the limit of spiciness for Kat. She ate the rice, most of it, to keep the spice down. I tasted it, and it was lovely and hot.

Kat helped me find Columbus Circle, and then I headed home.

I was tired and so decided to write this and do the dishes this Tuesday morning.

I hope you are enjoying the read!