I slept in a bit to 7:15 as I was tired this morning, and I woke at 5ish and then 6ish, so I wanted a bit more sleep. I needed to rush this morning and left after the usual things at 7:45ish. I stopped by McDonald’s for breakfast. I made it to the Forest Grove Rehab Care Center about 8:20ish and reached Susie’s room, 44A, while she was still eating breakfast. Susie sounded still weak, but she was not worse than yesterday, which is a blessing. I helped with breakfast a bit.

It was time for cleaning up, so I stepped out and went to the lobby. There is a large marine (salt-water) aquarium in the lobby, and I like to watch the sea urchin and the shrimp in the tank sometimes. I once had a marine aquarium, and when I see one, that old wish to do one again, but I have only time to look at them.

I found Dan, the administrator, and gave him the letter I wrote to the facility on how we wanted to communicate and what to do when I had surgery. Dan thought I would need a legal document, so I found one on the Internet and filled it out. After that, I would print it at home. But, the letter was essential to keep everyone on the same page; other legal documents support that.

Susie was finished with breakfast, and then the speech therapist came to work with Susie. The therapist worked with Susie for an hour and then spoke to me. The therapist believes Susie’s multiple strokes have damaged her ability to communicate and understand as the strokes were in different places.

At this time, I said goodbye to Susie for a bit and drove to Portland from Forest Grove, picking up my meds that I forgot to put in the car. The traffic was light at mid-morning on a Monday. I had a pre-operation meeting at Legacy Good Samaritan Hospital.

We went over all the meds; it was good to have brought them, and then blood tests. The stick was unusually painful, and I can still see the hole mark. The EKG was done so fast I thought it was the test run. Using a bright blue-colored machine I thought was a toy at first, my blood pressure was normal, and my oxygen levels were good. My blood pressure was so good she did it twice–still good. All I can say is, “Better Living Through Chemistry.”

Next, I met the nurse practitioner, who went over my history in detail and provided me a new set of instructions with some updates. She was wearing Nike running shoes slightly dusty from use. I learned she did not run anymore as she was an exercise machine, the famous type, and no longer gets injured like when she was running. My shoe company interests leak out once in a while. I am ready and locked in for 21Dec2021.

Next, I travel back to the house by taking Air Volvo out of Portland without event. I print out the form and return to the rehab center, grabbing Taco Bell along the way for lunch. I hated to get fast food ever since living in New York City for more than a month when even the fast-food was nearly perfect French baguettes sandwiches with soup.

I get back and remember to take in the tree from the Smith Family (+Jason) for Susie. It is a little live tree with lights. Susie was excited and happy to have a lighted tree. 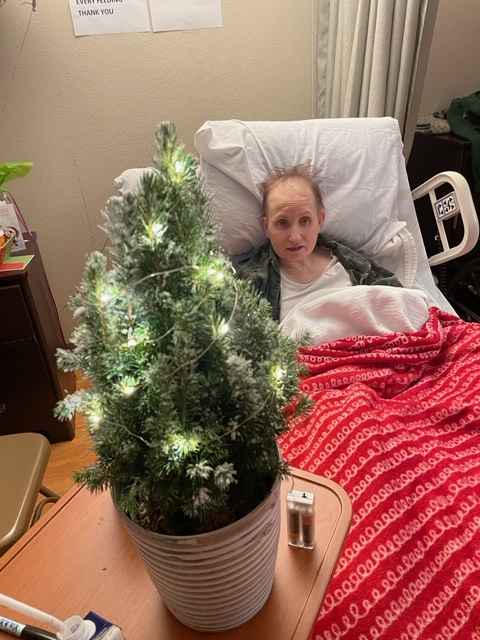 I have a few stressful moments with the staff as I need to get the forms filled out so folks can help when I am out next week. But, finally, after I was very direct, we got the correct form, not the one I printed, and now folks can get information about Susie’s health. Medical decisions are still not worked out, but access is now set.

I also called a lawyer recommended by Zerida to get my boilerplate last will and testament done before the surgery next week. I want to ensure that Susie is cared for and the obvious things are done should something go wrong next week. The lawyers will have a draft ready in the next day or so, and I should be able to sign it on Friday. I wanted to solve other legal issues, but the lawyers believe these challenges will take longer to handle, so they will have to wait. A more complete estate planning will also follow later.

I finally say good night to Susie at 4:15ish and head Air Volvo back to the house again. Jeff is there and, as I expected, not entirely done in the bathroom. One more day. The vanity does not quite work, but we can make a few adjustments to make it work well enough. The shower and toilet are perfect. I will be back in the master bedroom on Tuesday!

I microwave some soup that Zerida sent for me and a tamale which she told me were Peruvian style. It was fantastic and easy–I needed that. I also talked to her, and she will come to see Susie and do her nails and a bit of spa stuff on Tuesday afternoon. Zerida will also stay with Susie on 21Dec2021, my day of surgery.

I talk to Michelle and Dave, and they will drive me in for the surgery. I just need to work out the pick-up time here at the Volvo Cave. I will review the documents, newly revised, and see when I need to be in Portland.

I watch an episode of the Wheel of Time on Prime. I liked it, but it is hard to follow. I will watch more.

I received a Kickstarter reward today that is very late. However, it is nice that folks still try to deliver: Five Moons Roleplaying Game: Player Guide. It was promised in 2015. One of the spells, flipping through the 64-paged perfect-bound book, is Minor Undead Pet; I like that. I think I got a previous book two years ago–I will have to find it and put it with the new book.

I mailed the cash containing cards to Susie’s various younger relatives and will do Heifer International gifts for the older folks. Fruit cakes have already been sent out. Happy Holidays!

It was a busy day and night.