Here is today’s pic of Susie so that it appears first: 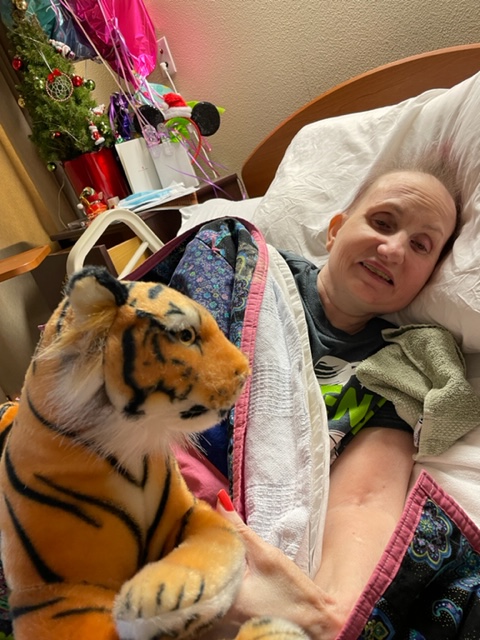 Note: I should mention that The 649 and the Mexican place are strict on masking. Also, I leave if they get too busy or have customers not following the rules. I am very careful going out.

Going backward, I read the Abhorsen books by Garth Nix, Lirael and finally slept about midnight. Unfortunately, my ears are popping and clicking still, making sleeping a bit difficult. I also took a nap in the afternoon, making sleep hard to find.

Brian Middleton, manager of Java SAP development at Nike (and other things), brought over KFC for dinner. I was late and missed him, but Corwin got the food. I had got a dessert at The 649 making me late after having a terrible (and embarrassing) reflux that had me nearly rolling on the floor coughing. I was thinking that the creamy dessert would prevent a repeat and having that reflux while driving home was not something that all the techno wizardly in Air Volvo could solve!

I enjoyed the KFC while watching the BBC news summary on Oregon Public Broadcasting. Politics look different when explained from a UK perspective. The news on BBC was not dominated by the potential war in Ukraine, but that did get plenty of time. I did not know that Athens and Turkey were buried in snow. I saw familiar sites in Instanbul covered in nearly a meter of snow. Wow!

Before this, I had Mexican food across the parking lot from The 649, Evan and I opened the place at 3PM. Evan and I played two quick games of Wingspan as we both have played this before. Evan was a bit rusty as he had not played for about a year and kept trying to pay extra eggs (an easy mistake to make). Evan managed to pull ahead in the first game, and I could not find enough high-point birds (cards) to even out the score. As a result, I lost by five points. In the second game, Evan made a few mistakes while all the birds (cards) were coming to me. I had never had so much food in a game of Windspand before. I ended the second game with five pieces of food unused!

The Wingspan board game is one of the best games out there. However, it is a bit random for me. It ranks 24 out of all games on BoardGameGeek.com (Concordia ranks slightly better, which I agree with) but is one of the best themed games I play. For example, I love to read the bird names aloud when playing a card. Also, the tiny engines built into some birds and the different areas you place birds (cards) bring delight to my inner Euro gamer. This game has little player interaction except for the raiding of the birdfeeder and picked exposed cards, perfect for the introvert. 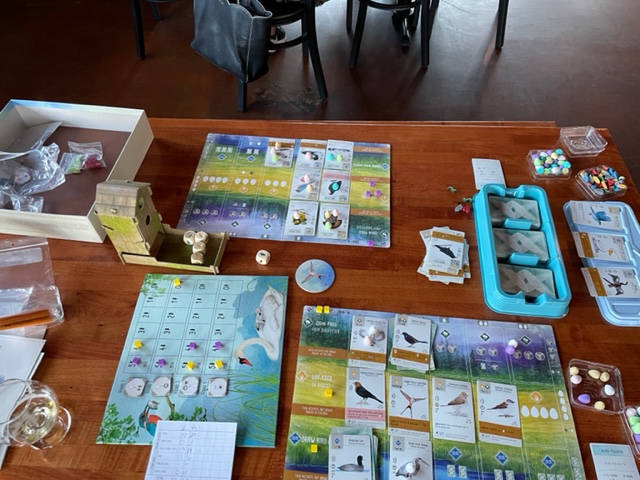 If you are more into birds or want to play a slightly tactile game (the eggs are egg-like) that has no combat and is about how you manage what nature (random) provides, this is a game for you. I strongly recommend it, but I would suggest finding someone who has a copy and learning to play from someone else. Learning on your own will be challenging, but many good videos explain the game now. Finally, I have passed, so far, on the extensions and just play the original.

As I said before, I met Evan for Mexican food after leaving Susie at the Forest Grove Rehab and Care Center at 3900 Pacific Highway, Room 44A. I did stop at the house to pick up Wingspan. My copy as wooden food items and extra purple eggs. Just a little bling.

And on the way before this, I stopped by the clinic, which is much busier today, and had the ear wick removed from my left ear, and it showed improvement. I waited about an hour. However, the actual process took no time but felt and sounded to me like a tiny octopus had been hiding inside my ear. Yikes! I could hear a bit better now (no more octopus blocking sound).

Moving to the morning, Susie was having a sleepy day. So when I was there at 11ish, running late as I slept in, she could barely open her eyes. Susie was comfortable and dressed in a clean shirt. The staff always has Susie ready for visitors by 10ish; they love her.

Susie woke up when I told her that her Aunt Joyce had sent her a tiger for the new Chinese year. Susie was born in the year of the tiger, and her aunt supplies her with tigers (including her fav slippers now, after years of use, held together with duck tape). So Susie grabbed the tiger and spent the morning holding and just looking at it and petting it.

Susie was happy to have a tiger with her and smiled. Next, we called Leta on FaceTime and Susie, and she spent some time chatting. Susie is still hard to understand but tried to get more words out. Following this, we called Susie’s Aunt Joyce in North Carolina and thanked her for the tiger.

I had to leave as I needed to get to the clinic and deal with my ears again. So it was a shortish visit. Susie was sleepy and kept telling me she needed to sleep. I told her it was OK. But she kept waking up and petting or holding the tiger. Evan called, and he also spoke to Susie for a few minutes before I left.

The morning was the same, except I slept in to help my recovery. My ears finally cleared about 1/2 through the morning rites. I managed everything, and the dizziness is mainly gone. However, I did feel it come back a few times, so I was conscientious and used the handles in the shower (it is gone today–Wednesday!).

As mentioned, I slept late as I had a few scary dreams. Mostly forgotten now, but still, I stole an extra hour.

Note: If you want to supply a meal, here is where my friends at Nike set up the app to manage meals (thanks, Molly):
Michael Wild Meal Train