I am up early on Friday and have all the symptoms from the infusion, and some are worse this time. It makes everything a bit harder. The chemo head makes the clock run faster. I was in a bad way on Thursday and could not get anything written on that day. So I will cover two days. As this will be hard on my memory of Wednesday, I will go backward, starting with what I can recall now. The side effects make typing this difficult.

Sleep was hard to get as I was a bit worried about everything. However, I was trying to relax and be well. It was a sunny day, and the pollen and other allergens had me taking my inhaler to stop the dry, unproductive cough and unlocking my lungs. I had my alarm set for 6:30, and I would be driving myself in.

I went to bed and read some more of the hardcover The Words That Made Us: America’s Constitutional Conversation, 1760-1840, knowing that I can’t lift the book once the chemo starts for two weeks. I have reached the slavery section, and the book is beginning to deal with the impact. The title of the book uses capital US but also means us. I am pleased with the book so far (page 106 plus long preface) and its playful use of archaic usage.

Before this, I rested a bit and watched some of the war news. Then, as my memory of Wednesday is faded, I think I did some updates to FaceBook arguing that windmills are not an evil-green plot to ruin the world and that EV is not the cause of California’s power issues. I have always loved windmills and grew up with them everywhere in Michigan to pump water for livestock and plantings.

Aside: I have seen a lot of comments and heard them about politics. I keep trying to talk and comment and find it an interesting experience. I thought it may be time to remember who we are from someone else’s speech: Churchill’s Address to Congress. And, it drips with irony; here is Nixon’s acceptance speech that did create a vision of what he meant to be as president (events and character flaws did ruin the dream, but the words are still good): Nixon Acceptance Speech. I only linked to the text as both men are not that good at delivery. These were the dreams of the previous century. They failed in many ways (especially Nixon), but the goals are still reasonable. I believe we always fought like cats and dogs in the USA, but it did not mean we did not have a vision which often was the same.

Returning to Wednesday’s story and still going backward, I met Mariah at the Black Dog about 3ish and had my last beer and cold salad before the next chemo. We chatted about various things and passed on the Batman movie as we both had something to do. Mostly, I am still tired and nervous for Thursday, the start of chemo Cycle 3.

I had come from the Forest Grove Rehab and Care Center at 3900 Pacific Highway, Room 44A. Susie was sitting up in her wheelchair, having just finished lunch, when I got there. She was happy to see me, and we called Leta, her mother, on FaceTime. They chatted for some time, and we then tried to connect to a few other folks and finally reached Glenda and Gene, Susie’s Aunt and Uncle, on her mother’s side, in North Carolina. They were happy to chat for a bit also on FaceTime.

I then took Susie for a trip in the wheelchair; Nichelle is the RN today and has Susie at the tables at the nursing station for the morning and part of the afternoon. Susie and I went out into the sunny garden, used for smoking mainly, to see the birds and the almost flowering daffodils (we are a couple 100′ feet higher here in Forest Grove, so the flowers are two weeks behind Beaverton in the Spring, but will catch-up in the Summer). Barb and Leta will likely see the daffodils in bloom when they are here on 25March2022. They will see Susie on 26March2022, giving me a break and they a chance to see Susie again.

Susie had to ask me where she was and wanted to go home with me. She wanted to leave with me. But she can’t walk or stand, so even a trip outside, ignoring Covid-19 and all its variants is not possible. So I have to explain what is happening most days now. Susie wants to go home, and it is heartbreaking to tell her to wait and be brave. The nurses help keep Susie focused and comfortable.

Aside: I have not been able to remove the wheelchair in Air Volvo that was there when Susie had her stroke. It is too hard to remove emotionally. Remember that the stroke that happened two days after Susie returned to Oregon, we think. It was not expected.

Returning to the narrative, I drove an uneventful trip to Forest Grove after getting up a bit late on Wednesday, my last chemo-free day before starting the dreaded cycle 3. I had a sandwich I made from roast beef and cheese for lunch. I had a breakfast of a banana and baked goods, including the aging muffins I made.

I will now reverse and go from the morning to the evening as it will be more logical. It was a harsh and difficult day. I am left exhausted and frozen this Friday. Writing is hard, and Grammarly got lost, and I am on my third copy of this story. I made a copy in Word to keep replacing, so I have not had to re-write it so far.

I started waking before my alarm but waited for it. I was trying not to rush as; usually, that makes me forget something. So I had food and then dressed and showered, paying careful attention to everything, including not cutting myself shaving.

I got the food and computer and kindle in a bag. This was a bit heavy, and I would undoubtedly regret that soon. And traffic had me worried, but I managed to get there without issue and parked on level C nearish the elevator. But, again, I would regret the distance.

I went in and followed the usual IV process; yes, they got it this time on the first try, in my right arm. I have to switch arms for the chemotherapy as it is hard on my arm’s veins. Labs are good with nothing too low. So onto infusion. My right arm does hurt a few times, and we wrap it in a warm blanket. Subsequent regret is not getting a drink of warm water to take with me.

I checkout and side-effects are starting, but I am OK, I think. Walk to car. The car next to Air Volvo is almost blocking the doors; opening the doors is hard. I have to put down the bag of stuff which dumps. I have to pick up the stuff as it is behind the rear wheel. My gloves are off, and I am now working pretty hard. I then finally get the bag in the car, but my gloves are in the bag. I have to have them. I reach in and start breathing a bit heavily.

My throat reacts, and I cannot breathe. I am strangling. I call for help. But all I can do is a wave. I have to walk back. I know it could be the cold issue as the instructions say this could happen, a false feeling of strangling in my throat tripped by the cold. But I don’t know. I need medical help. I end up having to lay down on the speedbump out of the car’s way, and the panic stops a bit, and support comes.

Folk finally called 911 and the docs. And the ambulance comes in about five minutes. I have not passed out and do not see stars or the darkening for loss of O2. It is not a happy way to evaluate my event, but it was the cold as I am not dead. I am still here, so it is the infusion; otherwise, after five minutes, I would be near-death and not conscious and unable to stand and walk to the gurney. I will be OK, I know now.

I get a new IV in the other arm and a 3 tenth of a mile drive to the ER. I explain that as I am still alive, it was the infusion and extreme cold sensitivity reaction, but the medical folks can’t believe that (I had produced evidence that was compelling that I was having a heart attack or worse) they run all the tests. By 6:00PM or so, they released me after chatting with the oncologist on-call that I was right and it is a strange side effect. I was happy to be alive and did not find out that the stress broke my heart or worse.

The Smiths came in their huge jeep, and then Michelle enjoyed flying Air Volvo home to the Volvo Cave. I had no repeats of breathing stress as I was careful not to stress by lifting anything, and David had the jeep warm for me. I was soon home. Air Volvo was also home. Michelle liked the comforts of Air Volvo and did not get to experience all the exciting protection systems as she had no events on the way back. 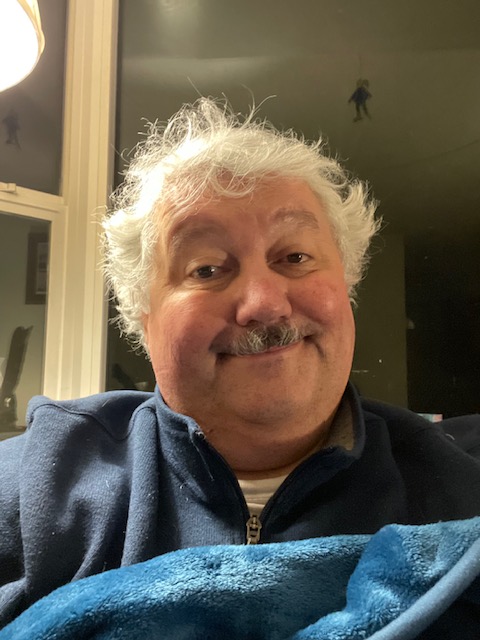 They get a pizza for dinner, 1/2 Thai, and baked potato; nothing I would select but David and Michelle are pizza connoisseurs, so the selection is excellent. They head out.

I take my pills, and due to the steroids bees in my bloodstream, I only can drift off for a few moments. I also have been told to not put blankets over my toes. The pressure can cause neuropathy. So yes, I use urea (cow pee) cream and now the lack of force from blankets. So odd, but it is working. But it makes sleeping more complex.

I am happy to be alive. I also had a FaceTime with Susie while in the ER waiting room thanks to the Rev. Anne Weld-Martin going to see Susie in my place. I am sure that helped relieve Susie’s worries. Dan Gray was also headed to the hospital but missed seeing me as I was released quickly once they decided it was OK–thanks, Dan. I was offered help by so many during my short adventure. Thank you all!