Friday was a busy day with me starting at 6:15 and working from home in the morning. It was a surprise to me that Nike started summer hours on a very wet Friday–it certainly does not feel like summer! I was busy the morning reading email and following along. After that, I had hours of meetings. I also had to remember how to do a timesheet again using software called Relay. I seemed to have lost all my links in my browser to all the software products I needed. I managed to get the link from Marianna at Nike. Thanks!

I had chia seed pudding, a bit runny, with fruit with coffee for breakfast. I am trying to improve my breakfast to more healthy foods; thanks, Scott, for reminding me. I also have a massive container of chia foods–I need to eat them.

I took a shower and got dressed between meetings. I stopped at noon as I should respect the summer hours. I made lunch of yet-another-box of mac and cheese; my church decided that I should get a food box when doing my chemotherapy, and now I have an ample supply of mac and cheese. I added our local sausage, Olympia Provisions’ smoked chorizo, to the pan to make lunch more interesting. I first cooked it after cutting it into cubes, having started making smaller bits when I ordered some food at a food joint, and I liked this better than coins and frying the meat until brown. It makes its own oil. I drown that in the water for the pasta and cook the pasta in the same pan; all the grease goes into the sink when I drain the pasta. I then add the cheese powder (!) with butter and milk. It was great, but it was a bit more orange than natural, yikes.

That was done before noon, and I was off to see Susie at noonish. The rain was going sideways, and the Forest Grove Rehab and Care Center trip included no dodging extra-legal driving that my fellow drivers seemed to like so much on the way to Forest Grove. I soon arrived at 3900 Pacific Highway and Room 44A.

I had to awaken Susie; she was quite asleep. Susie has been unusually tired these last few days. But, the trip to ER on Tuesday and the bleeding would, I expect, use up her energy reserves. Also, they have Susie in Rehab, intense rehab, every day–sometimes twice a day. So her being worn out is possible. But, her vitals are unchanged, and she has had no repeat of the uncontrolled bleeding in her gums–she seems OK. 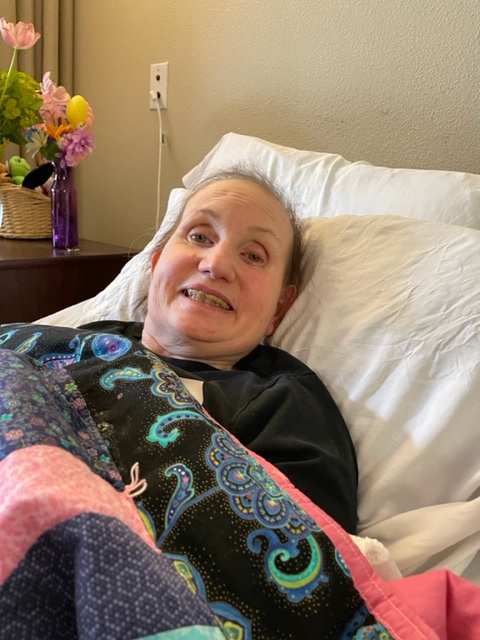 We managed to call Leta, Susie’s mother, and Susie almost fell asleep on the call. It was a short visit; I had my weekly chores on Friday and soon was steering Air Volvo through the rain and the traffic. I headed to WholeFoods.

There I picked up a few items and new flowers for Susie. I got some more food for breakfast and some things to help make a few dinners from food already in the freezer or the pantry.

I floated in the wet Air Volvo home, so it seemed with all the rain. I unpacked my items and then rested for a short moment.

I headed out early to Portland in Air Volvo, daring highway 26 inbound-to-Portland early on a Friday, and finding the roads busy but not clogged. I reached Guardian Games within 30 minutes, looked around, and even bought a small book (Tips for running games to celebrate the 40th of Call of Cthulhu Role Playing Game). I plan to meet folks there for games again in the near future. I was checking out the facilities, and I know the folks there, and they were happy to see me.

Aside: Cthulhu is in my spell-checking for Grammarly; I am sure you, dear reader, knew that.

I lost my iPhone at the gaming store, but they found it–I left it on a shelf, and they returned it to me. Unfortunately, it is not the first time I seem to get mesmerized by all the gaming goodness and lose my phone there. So I was relieved to get it back.

Next, I was a few minutes early for the game at Richard’s house after finding my way through Portland to his street. We played upstairs as Richard had the game out already, and it was just the three of us; Kathleen joined us. Tonight Richard introduced us to Arc Nova, a card tag and engine game, much like Terraforming Mars but revised to be building zoos. It was a beautiful game, but it is impossible to learn, I think, from videos as you need to tie all the cards together with the tags on the cards; that is hard to see on a video.

Once Kathleen and I got the mechanics straight, we could play it without mistakes–nice. Kathleen nearly caught Richard and scored a positive score for her first game. Towards the end of the game, Richard built up his engines and soon ran away with it–usual for these games on our first plays against Richard. I managed a negative 15 score, which Richard said was a decent first-time score. I am never worried about coming in last when playing Richard and Kathleen. They eat these engine-building card tagging games. While it is unlikely I can build the beautiful engines they find in these games, I do play well enough that I will catch them unless they are perfect–they are often perfect!

After we played one more game, I drove Kathleen home, its name I missed. It is a quick game of building shapes. It was better than I thought, and again I scored last–no surprise there. I got home after midnight. I stopped by McDonald’s for fries and a shake, which took forty minutes! Never again–I do not need that at night anymore.