The day started with me getting going at 6:30ish and starting on my blog after having some yogurt for breakfast. I kept writing through the Zoom status meeting at the shoe company at 8:05. I listened while I was writing and even commented on a few status items. I could not write fast while listening, but I did make some progress.

I finished Saturday’s 1,300 words blog by 9:15ish and got ready for church at 10:30. Air Volvo got me to the church on time without incident. Shawn gave the sermon, and the focus was your foundation for your beliefs. He titled it “Good Foundation.” He described how his faith has been strengthened by his experiences in Karate and the pandemic (all the people coming together to help each other). He also expressed that you can find solace in his favorite band’s rock and roll lyrics, whose name I lost (trying to remember it all day). Howard Ashley, our music director, played a fun version of Do Lord, Remember Me before we started the service (arr. Chuck Marohnick). I found a version online that will get you an idea of the start of our service. It was a profitable morning!

I was out of church at about 11:30, headed to lunch near the church, and selected Ur Mediterranean after parking Air Volvo on the street. While the service and dining area were basic–being kind, the food was terrific and had that extra home-cooked goodness that I had not tasted since I was in New York City. So if you stop by Ur Mediterranean, I suggest grabbing some food and taking it out to the nearby park.

Rant: Not related to the story; I saw a bottle on the ground next to a few more of the same type in Beaverton today, not far from where I parked Air Volvo. It is not the littering that makes me angry. These were 200ml booze bottles, and I know that alcoholics buy them when they are begging–their lives ruined by addiction. A 200ml is just a few bucks. The folks that beg for change that are addicted to alcohol use the small amounts they get to buy these tiny bottles–it stops them from getting withdrawal symptoms. When I see them tossed in pairs on the ground, I think of all the pain of addiction. The world seemed so lost to me for a while when I saw these bottles lying on the ground–pure pain. 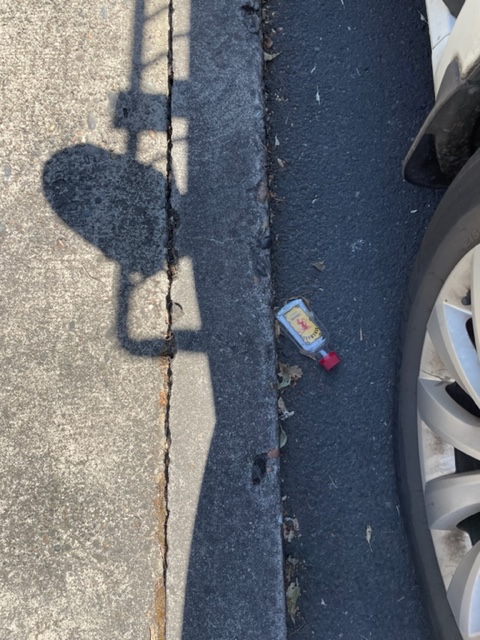 With a food-coma from a large gyro with spicy lamb consumed with gusto after a small breakfast trying to take me, I headed to see Susie. I reached, using Hall Boulevard to cross Beaverton, hummingbird house without incident. As usual, I was carefully following all the speed limits–the trip on Hall Boulevard is a tour of different speeds that change with only a white sign warning you to brake. So yes, the delta of legality is from 20 to 30 to 45 back to 35 to 30 to 20, all in a few miles. This requires you to pay attention not just to the fascinating driving traditions of Beaverton, Oregon (slowing for potential green lights, driving slow in the left lane, and slowing abruptly for a turn and then signaling), but to the signs and your speed. Do not even think of touching your phone!

Susie was napping in her chair and woke and smiled when she saw me. Rachel, the nurse today, told me that Susie had slept in late today and seemed more active than what was reported for yesterday. Susie was sleepy yesterday. Susie decided to do the park first today.

Rachel got Susie in her wheelchair, and then we headed outside. It was past noon, and the hot sun was starting to bake Oregon; however, there was a nice cool breeze, and the shade in the park was just perfect.

Metzger Park was full of happy kids enjoying the swings, climbing bars, slides, and spinning manual rides. The parents were at picnic tables eating or just watching. Dogs were also everywhere on leashes and enjoying a walk in the park. Plastic bags are supplied by the park for the pet owners, and trash cans are set in useful places to help folks keep the park clean and safe.

In the park, I watched one group of smaller kids playing miniature soccer against two adults. All of the kids playing against the two men. The adults clearly had the advantage of size and coordination, except the small nets and smaller soccer balls were hard to use for big people. It looked like a close match.

I sat with Susie on a bench and called Leta, Susie’s mother, and we talked for a bit. It was getting hot, and Susie was in a coat and sitting in a black wheelchair, so soon it was best to head back as she was getting warm. I was also getting sleeping from the double-whammy of lunch and the heat–best to get back to hummingbird house!

Rachel got Susie arranged in a recliner in the activity room, and we then played, a bit loud, the movie Rocket Man. This is the music version of Elton John’s life (the music is not arranged in chronological order but by pieces that best fit the mood). Rachel liked the music and checked in on us a few times. Susie was happy singing along and stayed awake the whole time. Here is one of the movie’s best and most potent scenes; enjoy.

After the movie, I headed out with Susie kissing me goodbye. It was a good day.

I was home using Alan Street to avoid the center of Beaverton. Corwin contacted me after I was home for just a few minutes. He came over and picked up more of his stuff. George, the suit of armor named by Susie, was disassembled and put in a box. We did use a dolly to get George-in-the-box into Air Volvo. Corwin managed two boxes of stuff and will get the other items, some tools, buckets, carboy, and blacksmithing items, next time. I drove him and his things to his new house on 214th, not far from the Volvo Cave.

After that, I did some light housework, but I started getting tired and rested for a bit.

My asthma started to make breathing harder. I turned back on the AC and took my inhaler. I am feeling a bit better while writing this blog. It has taken me a few hours to write the blog today, but I must admit I wandered a bit when I wrote it. Thank you for reading.

Apologies to Shawn for not getting the name of the band. Thank you for reading!