Yesterday, Thursday, was a bit of a blur of activity and bizarre weather, which I will try to relate. I was up later, after 7:30, and did not rush and had a bagel, a bread like local version, with cream cheese with liberal Equal Exchange coffee. I read my email and wrote the blog. Then, before I knew it, I was late to see Susie. Rick from Providence and physical therapy re-assessment is scheduled for 11 Friday. Because Susie missed her four weeks of PT due to Covid-19, they have to redo the assessment–frustrating.

I finally managed to board Air Volvo and get to the hummingbird house after 11. Susie was in her recliner and was delighted to see me in the morning. It was overcast, humid, and already 84F (29C)–we never get rain in August, but it sprinkled in the late afternoon. So Susie and I headed to Metzger Park next door to the hummingbird house. 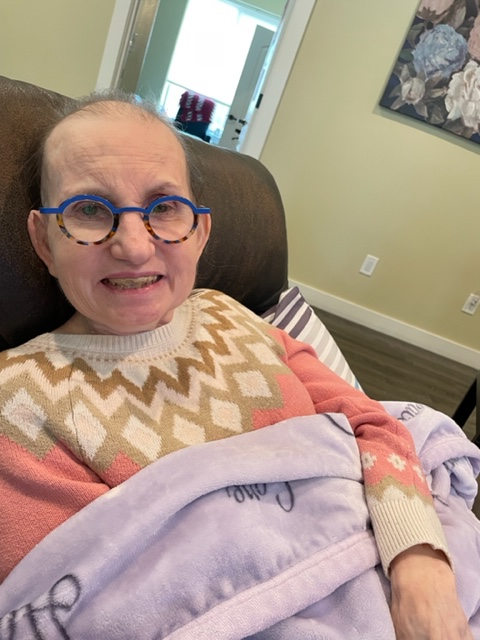 The park was busy. School is starting, and a bus full of kids, each with a pullover identifying them (an intelligent teacher got those), was playing on the swings, monkey bars, and other various kid things. There was a group of folks playing basketball on the courts. A dad and one older kid were playing against him, smaller younger kids. Dad threw the ball to smaller kids who often made a basket, and I could see the older kid was learning not to hog the ball.

Our favorite swallowtail butterfly was fluttering among the cedars, but the kids had our favorite bench in the shade with the cedars. With the new high numbers for Covid-19 infections and the start of school, it is no time for Susie and me to hang out with a random sampling of school kids! So I found another bench, sat, and called Leta on the phone. Susie and Leta chatted for a while.

Soon, it was getting hot, but I took Susie for an extended walk through the neighborhood. We also explored one of the short roads to look at the houses on a flag pole lot. The heat and the humidity finally drove me to take Susie back to the hummingbird house, and we sat on the porch for a bit. Jennifer, the nurse aide, brought water for both of us.

Susie was getting sleepy, so I left with a kiss while Jennifer took Susie to her room. Air Volvo took me straight home. I had a late lunch of left-over Jambalaya, which I ate while watching some history videos on YouTube. I like the Battleship New Jersey‘s channel, with the head curator for the battleship now presenting an excellent video. He has been watching the other channels, and I can see how his editing has improved and echo other historical video channels.

I rested for a bit but could not stand that I had not finished the IKEA assembly and went to take on The Desk. Just opening the giant cardboard was a challenge. I tore it open, not wanting to damage anything with a box cutter (which I did not have anyway). It is a big desk! I then followed the instructions and only got hit in the head once when trying to assemble the legs for the table. 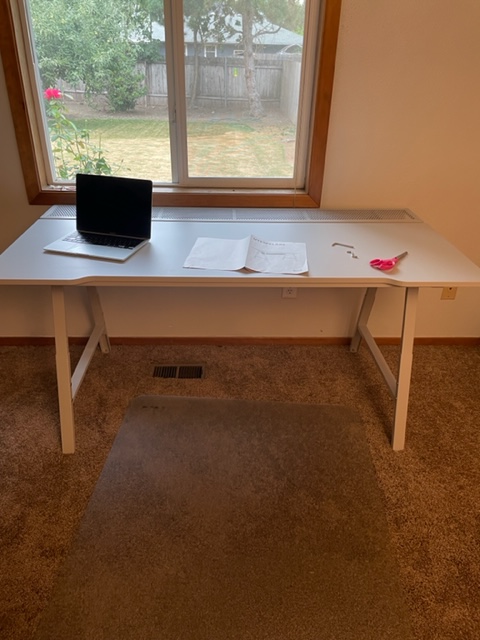 I put the wrong part on, but I had only set it in and slightly tightened the screws, so I soon had that corrected. I was already sweating. I wonder if there is an IKEA workout program, “Come to IKEA and assemble things and lose weight! ‘I lost ten pounds on my first table with chairs.'” There are a lot of screws to be put in with a slippery wrench, supplied, of course. After an hour of doing the IKEA mind and body stretching yoga, I had a new desk. It is lovely.

The next undone chore was to get to the Beaverton Employee Store, the dreaded BES. Yes, I know everyone loves it, but having worked for Retail IT, it just seems like going to work when I visit the BES. I try not to notice the missing product that the staff should have replenished and the price tags not nicely arranged with the price not facing the consumer. It is hard for me to enjoy the shopping experience.

My Air Force One (women’s as they had no men’s due to the usual excuse of supply chain issues) had broken apart. The material is not the same in the men’s shoe (I was shocked), and it just came apart. On the other hand, I am not exactly the target consumer for a women’s shoe, so maybe we can forgive the failure. 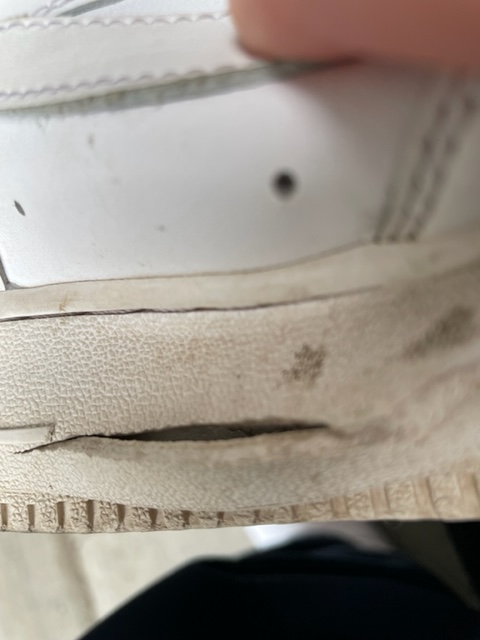 I found a new pair in black and white (men’s) that appealed to my IT binary thinking. I have been wearing all white for a while, so it is time for more color, well, just one. I bought them after being in a long line with BES adding cashiers as the line got very long, and put the shoes on. I tossed the box. 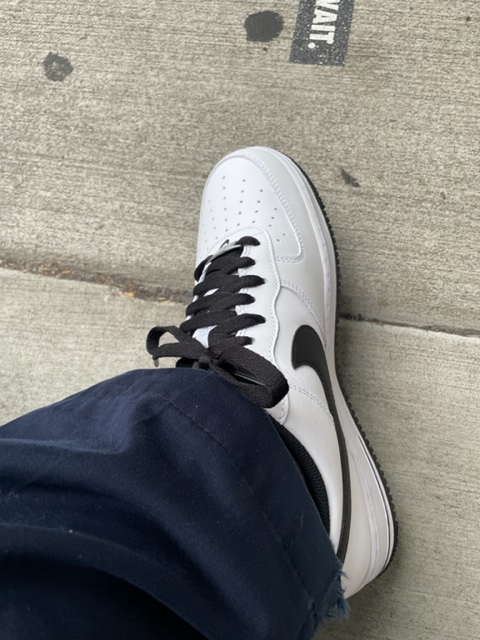 Next, I recycled my broken shoes and sadly got out my even older AF1, which made it through the start of the pandemic and the unexpected five-week New York City trip. “Thank you, old friends,” I thought as they were added to the regrind box at the BES. The next stop for those shoes is to become a running or play surface at some park. Not a bad ending. 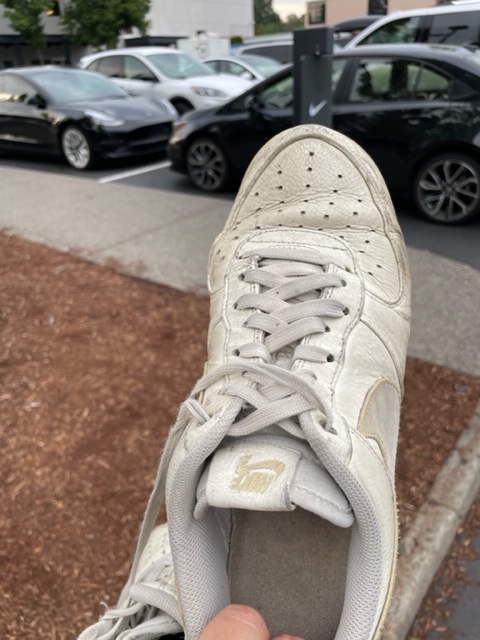 After that, I tried to make dinner, Ivar’s Clam Chowder, but it tasted strange to me, and I dumped it. I had some Spanish Bar Mix and decided dinner was covered by lunch. I found my fav mix at the new grocery store Basics.

I wrote more Dungeons and Dragons 5E adventure encounters in my new partially set up office in Corwin’s former bedroom. It is nice to have a workspace again. At Nike, we gave up desks unless you are a Senior Director or higher. So my only workspace is at my house. I often feel at work; I could be at Starbucks instead of at work as most meetings are still Zoom or include a Zoom contingent. The shared desk space seems to say, “work from home.” But, Nike leadership has required a return to work for most. I am trying to make it work, but mentally I find it harder to work at the office at a loaner desk on Zoom meetings all day.

I ordered a replacement service Internet service, Ziply Fiber, to replace Xfinity (Comcast), as my Internet access has again collapsed to slow speeds. I hate to change and discover how much pain a new service will bring, but Comcast is known to throttle access, and I constantly see this happen since they upgraded our local hardware. One visit from service is all I am willing to do. I tried to have the automatic reset of my modem to solve the issue, and that did not work. Time to move to a service that wants my money. Sorry, it has been twenty years with all the companies that were bought out to make Comcast. Once Ziply Fiber is installed, I will cancel everything from Xfinity–I am keeping the local phone number for now.

I read some more WW2 and hoped to have no nightmares from the mass deaths, stupidity, and lies that the book reminds me are the currency of war. A currency that was well spent in the 1930-40s.

I turned off the light and the radio; I had Alexa play Kink.FM for me while I read. While I like Kink.FM is playing increasingly oldies, and I am looking for good new Alternative Rock.

I sleep soon after the yoga of IKEA workout. I dream my usual dream of having to travel somewhere and trying to get ready. While I am glad the nightmare did not come, sometimes I get some excellent Dungeons and Dragons and Call of Cthulhu (another role-playing game focusing on horror) encounters from my nightmares.

“Yes, the encounters were pre-played,” he says with a haunting look.

Some details, I continue to read the darkness that is The Second World War by Anthony Beevor. I have reached the Nazi invasion of Russia and the beginning of the mass killing of Jews, about 20% of the book, and the desire of the Nazis to starve the Slavs. The account clearly shows the intentionality of the mass murders with the Nazis planning the deaths, their numbers not later estimations, of millions by starvation. It is hard to read. It does echo our times with war, and the false rumors spread to blame Jew and spies for everything going wrong. The use of media to create violence through fear and anger is nothing new I see when reading this story of eighty years ago.

The book is a story about the people who endured WW2. The author is also clear in his writing and documentation that many folks who committed atrocities understood what they were doing–he footnotes that. The story is about heroes and villains–a sadly human tale.

Feel free to call or send cards. Susie resides at:

Thank you for reading.