Home now and the car is unloaded, and the laundry is mostly done. Susie looks like sleeping beauty in bed–she did not play games at the convention, but she had to live the hotel life for four days, and those corridors are long for some using a walker. Corwin appeared for a moment this morning, got a drink of water, and disappeared back to dreams of dice rolling and conquest. Corwin said to me, “It is so nice to be home. It is so quiet here.” Yes, the noise in a nerdfest that is Gamestorm is loud with laughter and exclaims of success or failure as the dice or meeples reveal the fate of the players.

So a few days back I started early again, 7:30am, and then carrying two loads of props and rules and a notebook of notes all the way across the Red Lion at Jentken Beach to play my own creation: Istanbul 1926. It is set in the game called Call of Cthulhu (CoC). This game is a role-playing game (RPG) that followed quickly behind Dungeons and Dragons in the 1980s and is now on its seventh edition. The main themes are based on the mythos that was initially formalized by H.P. Lovecraft: Cosmic Horror. The game system is unlike D&D (or Advanced Dungeons and Dragons that was published about the same time) that is based on a system called D20 (meaning you roll a twenty-sided die for most things) and instead fits used D100 (meaning you roll two dice to get a value from 01-100) from a competing system, Runquest. CoC has many hand-out and props and is rules-lite and has very abstracted combat and magic system. While the arguments on which system, D20 or D100, is the most realistic and best, it is D100 for CoC.

My players showed, unlike my last game, and I had five players so we could have a good variety of characters and players (one woman and men of various ages). I handed out pre-made characters, and they selected what they wanted to play. I had male and female versions of about the same character and Asian and African American options too. I then had prop passports that they filled out, and we began. They started meeting on the Oriente Express headed to Istanbul. They introduced their characters and read the letter calling them to investigate strange doings in the new Republic of Turkey, it is set in 1926. They discovered that the local official had found a copy of the dread Necronomicon and wants them to determine its authenticity and source. The locals in modern Turkey cannot acknowledge superstitious like these, and so it is up to the investigators to take the necessary steps to acquire the book and to prevent any more dissemination of such superstitions in modern Turkey.

The story goes on from there, and it is best not to publish such horrors in my blog. We did get to use the adventure scents I mentioned in my previous blog. The first adventure was completed with everything ending in a gun battle with horrors of ancient powers, the near-death of one investigator, a convenient fire that destroyed a printer’s shop, and the placement of the printer in a home for the insane in Istanbul. I had prepared two more investigations, but we had spent most of our time on the first, and everyone was happy to survive. Everyone was delighted with their experience.

The next game I played was Rising Sun. I had set it at a beginner level, and well only I had played it before. We had five players. I spent the first thirty minutes explaining the game and the turns went a bit slow at first. Again men and women playing, some very happy to finally get a chance to play. My calling it “basic” in the session name had chased away the veteran players. 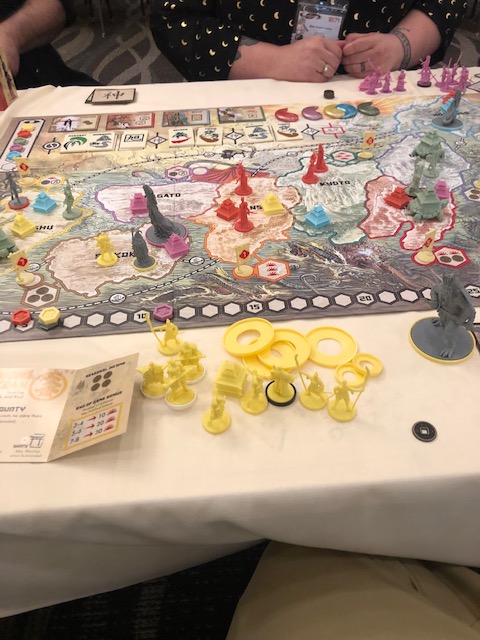 It is Japan-themed game with bright colored miniatures and (unpainted so far) huge mythological creatures and gods. It is easy to play, but knowing what to do and why is quite tricky. We managed to only play two seasons and the second had no recruiting in it! This has never happened to me in all the games I played. So only the red player had units on the board other than summoned monsters. Some of the players could just look on. Everyone was happy to have learned the game and played a few seasons.

I packed up fast and got 1/2 a sandwich and headed to the game I was not hosting: Vast. This is an asymmetrical game where each player plays a different game that somehow comes together with a story about a Knight, a thief, hoards of goblins, the cave, and the dragon. Each player is trying to hurt/help another player, for a while, and win a different way. It is fun and interesting if you know the rules. I met the group and nobody, but I had played. There were too many people, so I gave up my seat. I stopped by later, and they had not gotten very far, a narrow escape for me. I am nice and enjoying learning–but that would have been too much after hours of teaching already.

So a break! Meet a vendor who makes wands and potions for Harry Potter like items. He also had some horror items. I have new horror props of samples of things that should not be!

Next, I get to play CoC as a player. I play an archeologist that is a black man in 1929. I am a bit conscious of my roots and that I often travel out of the USA to avoid the Jim Crow of the 1920s. I known for my more physical solution, and I am quite smart and robust.

We are shipwrecked on a dread island, and I use my survival skills to build a camp, and we managed to get everyone that we find alive well. The other players’ characters managed to explore and discover our proper direction to the only buildings on the island.

Then horrors happen as we are picked-off one-at-a-time, the non-playing characters play the role of redshirts from Star Trek (last thoughts are, “what was that”). We have seen the movies and so we now will stay together. We figure out we need to reverse the horrid summoning that was done and send whatever this horror is back to the darkness it came from. Of course, when Dr. Jones (yes that name) who is whom I am playing, see the horror he well loses his mind (some bad dice roll on my part). My character believes, according to the Game Master (GM) running the adventure, that he can help by diving in and embracing the creature. So that is how I end that game as they reverse the summoning and send it and by accident my investigator to the darkness it came from saying, “I stab at thee!”

The GM gives me a 10% discount card for CoC supplies for playing my character’s end so well.

The next day is the packing, loading the car, and checking out and then running to the next and last game, Mare Nostrum Empires. This is a favorite I purchased after playing it a few years ago at Gamestorm. It is an economic and military game with a cultural element.  There are five ways to win! This means the players can focus on different tracks and, as I did as Rome, invade (Egpyt in my case) when someone looks like they might suddenly win. 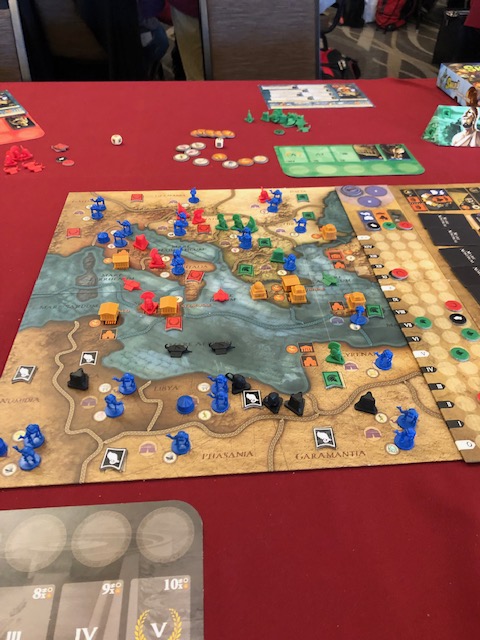 I was early for my time and thus set-up the game and called for more players (using an orange traffic cone to tell the other nerds I needed a herd of nerds). Got two more players and set the map for three. The game designer has a clever trick of just covering the board with the tracking boards to make a smaller play area for three. I won by watching Rome and Greece fight it out while I smiled and bought-up more military and cultural wonders to claim leadership.

The next game was played with an old friend who stabbed me in the back in a game called Diplomacy. “No hard feeling?” he asked just before Rome (I was playing Rome) burned down his Troy and another city. It was a learning game. One of the players, a Belgium residing in Seattle, needed to catch a plane, so we ended at 5:00pm without a win, I had invaded to stop Eygpt from winning. I did not conquer so I failed to burn his cities so it was likely he would have won. I was one city to capture to win also. The game plays close at the end. One of the features I really love about the game.

That is today’s summary of the last two days. It is a bit long and rushed. I will try to edit it a bit later (more edited now).

Gamestorm: It was amazing fun. I bought my next year pass for Gamestorm 22 already!