We are in Florida celebrating our friends’ (The Smiths) daughter (Kat) finishing her journey at Ringling College in Sarasota, Florida and starting her next adventure. We then traveled to Orlando to see The Mouse…

Note: Lost a version and got this one back

So I am about 30 mins from leaving the hotel: Wilderness Lodge. Off to the airport next as our trip ends.

We are just camping out at the Roaring Fork which is not that busy. We get to sit outside, but we are close enough to the doors that a fresh breeze of mountain-like air hits us as they double doors open. Earlier Susie’s breakfast was attacked by a raven-like bird. She had mostly finished, and the birds were attempting to steal her biscuit! It looked more like the bird version of touch-and-go practice landings.

We decided to skip the parks today. Susie had done a whole day and was a bit worn. I had new blisters and other opportunities for loss of comfort.  So we just were just hanging out.

Got the car just as the rain let-up. A big rainstorm hit, and we used Nav to find our way. It did at first have trouble with the roads in Disney. Some roads just did not exist. Odd.

Got to the airport and pulled into the wrong rental car place after having to just drive to the terminal until the last minute seeing the sign “Rental Car Return.” A bit nerve racking! Had to drive to another return. Finally, then the broken taillight. Off to talk to customer service who took information on the car accident. Having the Allstate claim number was like magic. Done. Bill will come later and then I have to submit that to other insurance. I will add Allstate rental insurance now. Too much of a bother while traveling to do it this way–Expedia coverage!

As before, we managed with the help of Jonathan, our wheel chairperson, we again managed to get through security without falls, exposures, or any lost items. We are safe and at the gate 45 minutes before boarding! I did get an extra and more complete pat-down from security–including my Mouse wristband, that I forgot to take off.

Back to yesterday, we got to see Micky. Michelle Smith met us at breakfast, and we then headed to the Magic Kingdom. We exchanged Susie walker for a wheelchair and headed for the Haunted House. They have them in the park, and we can use the walker until we hit the park. Our FastPath’s were for harder to get rides, so we decided on the Haunted House. We started with a 15 min wait, but it grew to 45 minutes. We still did it, and it was as always. Well, I did spot a few digital items here and there that I remember from a long time ago with more mirror tricks.  Also during the wait, there are things to do including triggering a cat scream. So I liked it. 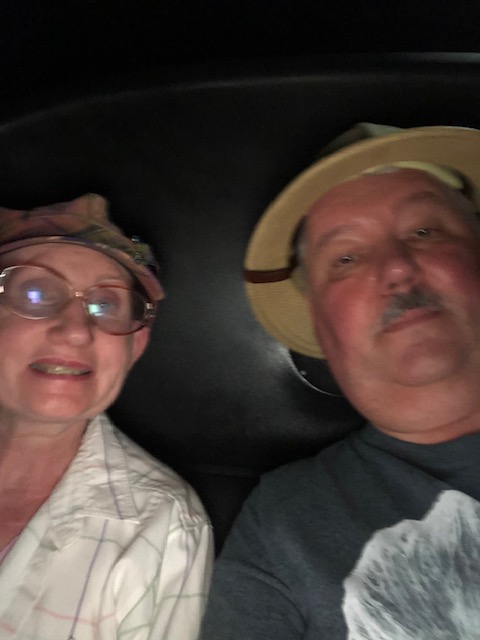 Next, we headed to another 45-minute wait, Pirates! It broke down. Then it was good. Then it broke, and they turned on the lights and asked everyone to leave. It was strange how hard it is for folks in this crowd to just turn around. The staff had to come out and direct people out of the emergency exits.

We switch parks by bus. You would think they would use something well more Mouse than walking forever to catch a bus. The Animal Kingdom is a really nice park. Recommended.

The Kali Expedition was next. A FastPath. We got special service as they pulled a raft out for us and we got Susie in. We could have gone twice, but Susie was wet enough! Because we were a special group, a cast member looked us over and said to the small girls that they were not “wet-enough.” They use a water cannon to push the raft back into the special dock. This changed the condition of the gals from miraculously dry to not.

Dinner was in Pandora.  The park, Animal Kingdom, seems to be huge spokes. The walk seems forever. Michelle took over pushing Susie’s wheelchair. I was getting back problems and feet issues. The food was great! I had the garlic shrimp over noodles (no rice for me, Diabetes!) with cream sauce. I even tried an adult beverage. Yes, there is beer in the Animal Kingdom. We saw them being carried into The Kali Expedition!

Even without the beer and being able to drink in the line waiting for the ride, this is an enjoyable and pleasant park. Michelle pointed out the flowers, orchids—my favorite, growing in the trees. At night, In the Pandora part of the park, the artificial flowers glow, and the pavements are painted with black-light glowing paint. Black lighting is hidden in with the dim regular light. It is a fantastic feature.

We had FastPath for a river cruise. David and Kat were back in Sarasota, and the project to load up the newly repaired MDX (new alternator, new battery, and cleaned-up battery cables) was working great. Kat’s stuff—all of it—fit in the MDX–Kat is a fan of Doctor Who and may have learned something there. There is even an extra room–Definitely, the MDX is now bigger on the inside.

The Smiths are keeping the spare car a few days, as David had to rent it for a week to get a larger car.  David and Kat were not back in time to make the next FastPath. The boat ride was a view of the new state of what Disney can do—I am afraid it is more of “It’s a Small World” but with better music and better effects. A few effects I did not know how it was done, so it is excellent work. I would not wait to see it, but it is Ok.

We went shopping, and Susie found a new hat. We shopped for quite some time. We found some ice cream with Susie and I cooling off with a frozen chocolate banana. No surprise that Michelle went for the Micky shaped ice cream. We felt much better after some cool stuff.

We connected with David and Kat finally at Starbucks and then headed to the last FastPath which we made just before the park closed, Everest with Yeti. At a point, there is a pause in the ride to see that a Yeti has broken the track. I was able to ask David to get out; he was behind Susie and me, to fix it.  This was our best ride and also the last. Susie got her coaster in. So we are delighted to make that one, a new fine one.

We ended up with just over-priced appetizers, while good, for dinner. Disney Wilderness Lodge has no late food for hungry late park goers. I see a letter in my future for Disney about buses and food.

It was still a good day and that last ride—Everest with Yeti, the only one for David and Kat for that day, was good. Especially were the extra fireworks. As we reach the summit, the clouds flashed lightning for us. Susie battered a bit from the ride, was still happy to get one special ride in.