Work included discussions that were not quite shouting matches–odd on video–but emotions were expressed. My blood pressure was quite high, and it was hard to focus after dealing with high-stress conversations. I am more tired now than I was hoping.

The stock market was down just a bit today. My mix of bonds and equities in my 401K is still rising. If the stock market continues to recover, I may fully recover my losses soon!

Today is the USA Tax Day. This year payments and even filing are allowed to be delayed. I paid all of mine and also filed for the government to return some of my money, which they sent already. Today I was surprised to receive our payment for the virus relief. Yes, I even got some of the money.

I picked-up lunch today from BJ’s Brewhouse as I wanted some of my favorite beer from them: Jerimiah Red Ale. I had their lunch spaghetti and meatballs. I had a beer while making dinner. Chicken teriyaki on the grill (Corwin who lives with us did the grilling). Cornbread muffins and peaches, canned. Susie approved!

I was tired, so I did not get too much more. I did make a cake, German Chocolate with Oregon cherries soaked in rum. Tomorrow is my next 29th birthday.

Today is not only tax day but the anniversary of the loss of RMS Titanic in 1912, the year of my grandmother’s birth. I made a small model of the RMS Titanic a few years ago when we did a class on Python Machine Learning using the Titanic victims as part of the data set. I have coal from the wreck. I also have piece of the first-class stateroom paneling from the sister ship of the Titanic, RMS Olympic.

I also today joined the Kickstarter for the last game in a series that I have purchased over the past years: Ankh. I have both Blood Rage and Rising Sun, which is by the same game designer, Eric Lang, and part of a series. These games all feature huge and intricate figures in the 28mm scale. These are “dudes-on-a-board” type instead of Euro or meeple driven. I really like his games. They also are just run to play with you pushing around those massive and/or lovely figures on the game board. 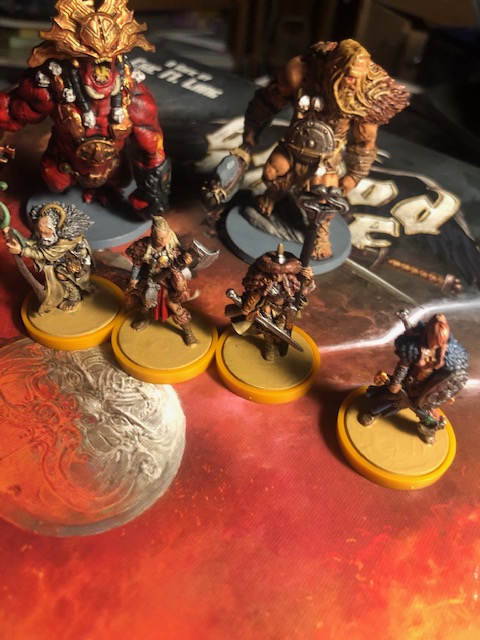 (Blood Rage figures painted by me a few years ago, yes girl Vikings)

Today it was reported that more than two-thousand four-hundred people passed away in the USA from the virus. I picked this one, not one I know, Abide with Me.