Today is the beginning of Summer 2020. Nike closed at noon this Friday for summer hours. It feels strange to start summer hours and even summer in lockdown.

I worked all-night again. Getting some sleep from 3 to 7 and then a nap this afternoon. I am done with work until after the holiday, India time: Monday night late.

As it was summer now, I decided to cook my lunch. Found pork tenderloins wrapped in smoked bacon in the freezer. Defrost those with running water in the sink. I found a can of baked beans. I fried the fillets in a pan browning each side while heating the beans in a pan. I then put the pan in the oven 425F for ten minutes (too long actually) and then when done (overdone) used the pan, being careful to use oven mitts to hold the hot pan, added butter to the crunches in the pan and bourbon just a touch. I also added bourbon to the beans. I put the pan sauce on the tenderloin and served with beans.

I overcooked the tenderloin, but it was still good.

Susie was up about noon today. She had more scones.

I got out my matt and terrain items with work finishing and lunch baking. I used to play Frostgrave, and so has a collection of fantasy ruins for 28mm scale figures. I set up a “smash and grab” scenario for Pulp Alley.

I was playing by myself just to learn the rules and see how it felt. I had to get some markers for damage. I have some replaced Scythe parts that worked perfectly. I bought more “bling” for Scythe, and the more plain original wooden parts are now extra.

I played my first game. It plays fast, and I had to look up only a few rules. I thought it too simple, so I had my two leagues fight it out. That was a lot more interesting.

I finished lunch, took a nap, and reset the game. I played another game for four turns. It again played fine. The Fortune and Reward cards really make the game fun. I avoided combat between the two teams this time. I rolled more normal results this time–the first game I had unusually good rolls–and the gameplay was better.

I think the normal rules with scenarios with more details would really improve this. 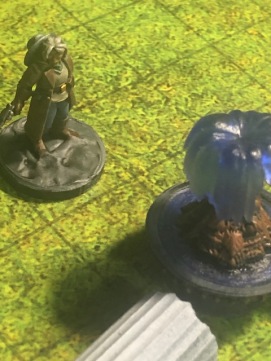 I received my Dangerous Dames cards for Pulp Alley and figures from Canada for the Kickstarter. So more metal figures to paint!

I received an email from Pulp Alley. They have my order for the complete rules and cards, but they need to delay it until more cards are printed. I replied that it was OK and sent them a picture of the set-up. Dave replied and said he loved the pic and told me to email them any questions on how to play. The world of the Internet supported gaming is just so fun!

I am still sleepy from the no sleep for three days. So a short set of stories today.

The stock market went up and down and ended close to where it started. The market is up for the week.

The V-shaped recovery is still not happening as the market cannot get above 25,000.

In news to make you purchase a red flag and wave it, Zuckerberg of Facebook is collecting information where employees are now living and planning to cut their pay because of their reduced cost to come to work and the lower labor costs in some markets. So if an employee moves to a rural area to reduce their cost of living–now permanently working from home, they will be paid less now. According to the same report, there is also no plan to reduce executive pay as that would lose their access to executive talent. This does come to mind.

Today it was reported that Oregon has 47 new infections and 2 more deaths from the virus. Also, today more than one-thousand two-hundred people died in the USA from the virus. I found a summer hymn to remember our loss: RUTH-SUMMER SUNS ARE GLOWING.