The morning started too early. I could not sleep and so I was up at 6:30 AM on a Saturday! Corwin, apparently looking at a new workout plan, was up early and was just finishing bacon and eggs, enough for two! Well, my timing was better than I expected.

I had left my new game, Istanbul: The Big Box, out and we reset it for two players and played a game. I had to teach the game, but I played it against myself yesterday and had the rules and even some of the strategy down. The game is an award-winning design that has your merchant touring the markets in Istanbul with a cart trying to attain the right resources to trade for more resources or rubies. The player with six (or five for more player) rubies ends the game and likely wins. The game is light easy to learn and has a strategy that become apparent even in your first game (like you need your wagon to be bigger), but you seldom interact with other players. This means you are not actively completing and keeps the game happy.

Aside: I have played it before, maybe once before using Guardian Game’s copy from their library. The game store has an impressive collection that is available to play-before-you-buy or just to play. You can also get a beer or other snacks and drinks there. We often rent a room there to meet and play. 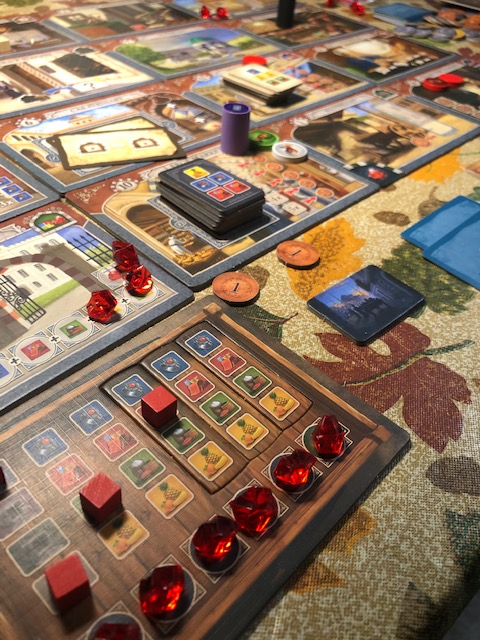 I punched and assembled the game yesterday and put the stickers on the wrong piece for the player’s merchant (it is thicker than the assistant pieces, I discovered later). I went to the website to see if replacements were available. I had to switch to on BoardGameGeek to the Istanbul game and found alternatives for the stickers–all women. I liked that. So I scanned in all of the pieces. I then removed, destroyed, the stickers from the assistant piece and then cut out two women colors and three men colors and used school water-soluble glue to attach the new paper printed replacements this time on the correct and larget merchant disks. My cutting was not perfect circles, but they looked good enough, and having the white and yellow merchants now be women, one with her head covered, really worked for me.

I then scanned in two images from the board to see if I could make two more unique men from the game itself. The art was just a bit too dark and did not add as much as the women merchants, so I left the game as is. Only make changes that improve play or the comfort of the game.

I am not feeling well today. Could be the lack of sleep and stress (more layoffs at Nike) and Susie is still a bit confused, and this makes it a bit hard on me. She did ride her bike today.

I went, for the first time since February, to Wholefoods. I wanted some Mexican Fairtrade coffee. I have vowed that I would drink coffee that the President would not approve of since his election. I have had to use Duncan Donuts coffee when ordering from Safeway. I drink overpriced, fair trade, border crossing, and liberal coffee! I picked up a selection of cheese and meats for a cheese and meats tray for dinner tonight. I was, as always, surprised the bill at Wholefoods.

Everyone had a mask and the store seemed very careful to keep everyone safe. I chatted with the checkout guy. He suggested ordering and delivery services, as I was still nervous about being in the store. The cheese seller told me that Wholefoods has never slowed down since the lockdown (there is a sad sign that says no free cheese samples to protect us).

After I put away my new items, I took another long nap. I am still tired. I played myself again on the game Istanbul, such an excellent game it is fun to just play.

I received today the new metal masts for the Titanic model. The plastic one often breaks when you are working on the model and are out-of-scale to make them stronger (out of scale by 2x). These new masts are from on the web from Master Model of Poland and are made from brass and machined to scale. The Internet creates a market for all sorts of unique items for models and gamers like 1/700 scale masts for RMS Titanic–I ordered the masts from eBay and took a week or so to get here. The gaming and modeling and model train folks now can have impossible to get items. Previously, I ordered metal propellors for HMS Dreadnought and gun barrels. They look perfect on my version of the battleship!

I put away the games and got back to the Titanic model. I am mounting replacements for tiny windows and door frames.

Today the reports show more than five-hundred Americans were slain by the infection. I found this church’s version: Stand Up and Bless the Lord.