I started this morning late, getting going only just before 10ish. I was tired, and Susie was up at 4ish and 7ish, and so I just fell into that dark sleep one gets when sleeping after disturbed sleep. I awoke just before 10!

I did the mass of dishes from last night. As usual, my Instant Pot cooking and prep looked like Julia Childs went mad in my kitchen. It took me about an hour to get the mess gone and also to start the laundry.

And I then cooked a quiche for lunch–Susie loves quiche. I first stripped the last of the good meat from the ham we had since last week. I froze the remains and added a few cups of ham, cut small, into a bowl. I grabbed a frozen pie crust from the freezer and pre-heated the oven to 350F. I added to the bowl four eggs, a cup of cream, about a cup of shredded swiss cheese, added Herbs de Province, and stirred until well mixed and poured into the frozen pie crust. I then baked it for 45 minutes. Done!

I am working on the figures for the dwarves faction in the board game Heroes of Air, Land, and Sea. I have managed to get the flesh color and some red on them now. I packed away the paints, brushes, and figures as Evan was coming over to play board games. I use the same space as it is with quick calling distance for Susie. I will get them out again later this week. 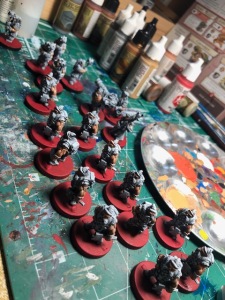 Susie and I both had two pieces of quiche for lunch. I then slipped in a piece of The Cheesecake Factory Keylime Cheesecake. I bought a whole one (it is too big–don’t do it!). We had no plans for today, we put on Disney+ and watched the animated Beauty and the Beast.

Evan came over, and he and I played a very close game of Concordia. Concordia is an elegant game that plays well with two or more players. It is set in Roman times.  In the game, you are playing a family trying to build a trading house, the best in the world, as are the other players. There is some competition for resources. Most turns, a player juggles the resource constraints of funding the building out your trading houses to new places and collecting resources to do the building. You are usually short of money, resources, or already did the action and having to wait until you can reset again.

BTW: Concordia is re-implemented by Concordia Venus (buy that one).

We then ordered complex pizza from our take-home-and-bake Papa Murphy’s Pizza. We got a New York for Susie, and we made a 1/2 and 1/2 for Evan and me. I had a cowboy, and he a custom veggie pizza. We baked them and continued our second game, Pandemic: Reigh of Cthulhu. The olive oil in the Evan version smoked a bit.

Pandemic: Reigh of Cthulhu is a rework of the original Pandemic game, the game that re-introduced me to board gaming years ago, with the dark themes of Lovecraftian Horror replacing the familiar theme of exploding pandemics. In this game, you try to shut down the four eldritch gates filling the world with horrors before the world ends, or you all go insane, or the cultists overrun you, or the monsters overrun you, or you run out of time (not likely as everything else will likely get you first). Like all Pandemic style games, you are working together and can help each other. The game system makes it harder, and bad things happen faster and faster. These Pandemic games are quick, have a complex set-up that creates growing tension and is easy to teach. I also have painted the figures and added some third-party enhancements to make it better fit the look.

I have been reading Ready Player Two and have a 5PM Zoom meeting on Monday with the author hosted by our local book store, Powell’s.

It was a quiet day.

I went with I Saw Three Ships for our song for today. I could never sing this.