Today we start the weekend work for data conversions. These are running 7/24, and I am on call all the time. I follow along and try to help when I can. I managed to slip out of work at 5ish to head to Richard’s in Portland, and we played Anachrony with the newly painted figures I did for Richard.

The game is still a mystery to me. I have watched many of the videos on the game, and the mechanics are clear to me. However, how to play the game and win is hard for me to work out. It is a SciFi story that is a skin-over and engine building game with resource management elements. The game has a time-travel device, and you borrow from the future to build now (and they pay back the debt). You have different kinds of workers who can do some tasks better than others or even be excluded from some actions. This makes the decisions and timing of actions tough. And then the meteor hits, and you must evacuate the earth! You can only leave if you have completed certain requirements. So while building the engine, using resources, traveling in time, borrowing from the future, you also have to plan to evacuate. Anachrony is a game with a lot going on, and I look forward to learning its mysteries.

I scored only 35 while Sean and Richard were double that. Richard had built buildings that create an Engine. Sean was capturing goals and time traveling all the, yes I will say it, time. Turn order is critical and I was last for about half the game. That was a surprise to me as many of the actions are limited by worker placement mechanics. Something that was obvious once it started to happen to me. I had powered up more mechs that I could use effectively in two turns of the game. Richard and Sean took all the positions that can build in the first two turns. I was lucky to get one build in! Anachrony will be hitting the table a few more times I am sure at Richard’s. I am looking forward to learning it better!

Return to the morning, the day started out with very little sleep. The anti-coughing meds make it hard to sleep, but they have worked, and I am feeling better today. I got going about 7ish and managed to make my first Zoom meetings all dressed and ready. I caught up on email and the news and then rushed to get cleaned up.

Susie had a change in plans yesterday and her spa day is today, not Monday. We managed to get her out on time. She also had an eye doctor at 2:30. Zerida and her driver decided that they could handle that for me.

I returned to Nike Office today, the Clubhouse building, to pick up my personal items. I had an appointment at 1 to enter the building. It was strange to come to the building and nobody is there. I found my chess set where I left it and left. It was funny to be wearing my badge again and a mask in this building. I have not been back since February 2020. 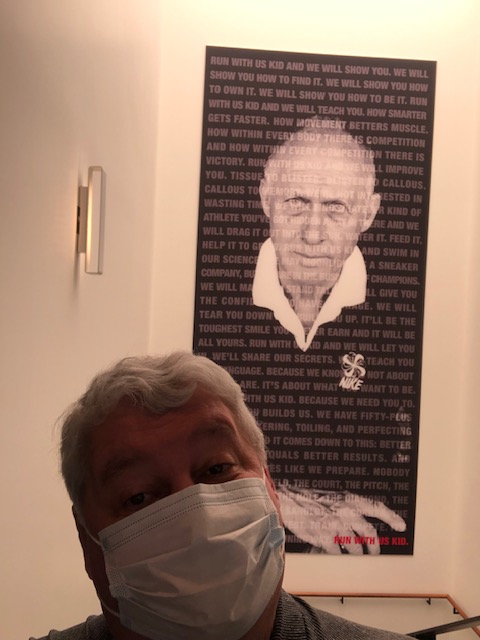 Lunch was nearby at the old pizza place. It has reopened as a sports bar: Replay Sports Pub and Arcade. I had an $8 lunch of a mini fresh-made pizza, salad, and a soft drink. There is a large supply of familiar 80s-style arcade games, and while 50% off plays on Tuesday night is tempting, I never remember arcades as very sanitary, so I will likely pass.

I returned home and worked reading emails and trying to help with a few minor crises of the moment. I then drove to Portland in Air Volvo. There was a crash and fire on highway 26 that made the trip take the usual 45 minutes. The traffic on the bridges and inside Portland highways was light.

It is very late so I think I will stop there.