This weekend swirled around my near heat stroke issues on Friday. Any exposure to 80F+ seemed to wear me out. So I had to stay inside in AC all weekend. I only went outside here and there.

Saturday started with me catching up on my blog for Friday and just getting going. However, I did finish the old 1930s movie The Black Cat in the morning. This is a bizarre movie that, when made, was at the limits of technology and art. The goofs and acting are very odd. The staging, too, is so strange you are not sure what you are watching.

Going into more detail, the movie hints at forced marriages and violent murders and has an amazing Satanic ceremony complete with organ music. The service is in Latin! I did find a site that translates the words–it is all grammar school lines spoken by Karloff that makes them sound sinister. Before the Satanic rights, Lugosi and Karloff play chess to decided if the nice couple that ended up at the evil cult headquarters will be allowed to live. Finally, Boris Karloff is partially skinned alive by Bela Lugosi at the end of the movie to pay for all his misdeeds! All you see are shadows and Karloff’s hands straining against the chains. Events follow, and Bele Lugosi says, “It is the red button,” that causes the evil headquarters to be destroyed with Boris and Bele still inside (it is a black and white movie). Thus the idea of a big red button is born! Of course, the nice couple escape.

The movie was a hit and was banned, again from my reading, all over the world. It is also the first time that Karloff and Lugosi worked together.

Evan contacted me, and we arranged to have lunch and play a few board games at the taphouse The 649 in Beaverton. I had soup and a taco and iced tea. Unfortunately, the heat was still a problem for me, and the AC at the Mexican place was not working well.

We moved over to the well AC’d The 649. This is a taproom we have used before. They are game-friendly in the afternoon–they are not that busy. So we grab a table inside and play a game and have a few drinks and usually some munchy.

Today we went with Vindication designed here in the Portland greater area. I know the designer. We have not had it out for a few months. I forgot how fast it plays.

The game is based on the idea that you are a wretched person thrown overboard and swims to an island where a companion finds you. You now are trying to vindicate yourself by exploring this magical island and gaining honor. You and other players, also playing wretched persons, are trying to gain honor. Your abilities allow you to invest in strength, knowledge, and insight. You can combine these to make wisdom, for example. You use the abilities to hire more companions. You then can activate them to gain their abilities and special powers. Or maybe you can find the tower where artifacts are available to give you use their powers. There are monsters to defeat that may slay your companions until you have the conviction to keep them alive. There are many choices. You may also move your potential to influence to use those resources. The game is about making choices on a random set of options.

The game is a resource management game with engine building possible. It plays fast and is made to look beautiful.

I lost the first game by seven points. That was anyone’s game. In the second game, Evan had terrible lock slaying monsters and lost his only companion twice. I have had this happen to me too. Evan lost by much more. The game end condition was hit early, too, meaning Evan had no time to recoup the losses.

My general approach is to get many companions so that I get their ability and special power. I usually find a combination that works much like an engine in a Euro game by having many. I then seek to Vindicate my character by using monastery location to exchange the attribute knowledge to improve my character by moving potential to influence. I also try to improve my speed. These give me a chance to win. When I fail at two of these, Evan usually crushes me.

I still like the game, and it plays fast. I think it plays better with more than 2+ players as if both players play well, the two-person game is always +/- 7 or so points apart. That is just chance. I have ordered the new add-ons on Kickstarter for the game. They will show in six months or so (depending on the messy supply chain that is now China).

We returned home after the game and a drink and a pretzel at The 649.

From there, we loaded up Susie with Evan in Air Volvo and drove through the McDonald’s at Cedar Hill Crossing Mall. The drive-thru had palm trees!

We then went to Powel’s books, picked up my book on order, and got a few books for Susie.

Outside of the books store, someone made a chalk painting.

After that, we headed home, and Evan went home.

I stayed up and watched Gunpowder Milkshake on Netflicks. This is a cable movie that is an amazing action film. It is so bad it is good. Karen Gillian just can’t convince you that she is taking any of this seriously. The camera work, the set work, and the actions are great. The acting is odd. I liked it, but you have no idea why the story bounces around so much. It steals from Clint Eastwood westerns and John Wick without even a wink. But Karen Gillian and the rest of the crew just can’t seem to decide to be serious or a comedy. It needed to be more serious, but still, it is not terrible.

I finished the laundry up this Sunday morning by drying the last load from last night. I decided that I was not going to sit in a hot church. I had trouble with the heat above 75 yesterday.

I spent the morning watching yet-another-silly-movie. I put on The Old Dark House, another 1930s horror film. This, too, was another group of travelers trapped, in this case by a bad storm, in a house full of trouble. This time an insane would-be drunk and another insane brother that wants to burn the house down. Boris Karloff is in the background a bit and not the main bad guy. He uses a high voice, and if you did not read the credits, you would know it was him! The movie shows him in a different light; he is also given some of the best lines and plays a frightened butler-like character. It is a strange movie and even manages a happy ending. Can’t recommend it.

I had chores to do. I committed insecticide on the ants after getting a mix of products from True Value Hardware. The store was packed, and only about 1/3 of the folks were masked. I was not happy being so close to so many folks. The check-out line still is socially distanced.

Susie spent the day watching the Olympics. I also slipped out and stopped by the Hobby store, Tammy’s Hobbies, to get some glue in Beaverton. I then picked up some basic groceries like milk and eggs.

I read for a bit and then headed out for a game at Corry’s house.

We are playing an adventure in Hell using our War Machine. If you remember, from a few weeks ago, I had pictures of the model I built for the game. We had that model out again.

The designers of the adventure in Hell, it is a purchased adventure, seemed to stack a quest on top of another quest and then another. It is truly hellish trying to figure out something. Our DM Matt also buys all the premium add-ons, so we will try to use all the toys. So we will continue on the multilevel quests.

I am back home and rushing to finish this blog. I even started it before it in the afternoon.

Sorry if I left too many typos.

One last item, one of my roses has rebloomed. This rose has my favorite round structure for an English Rose. 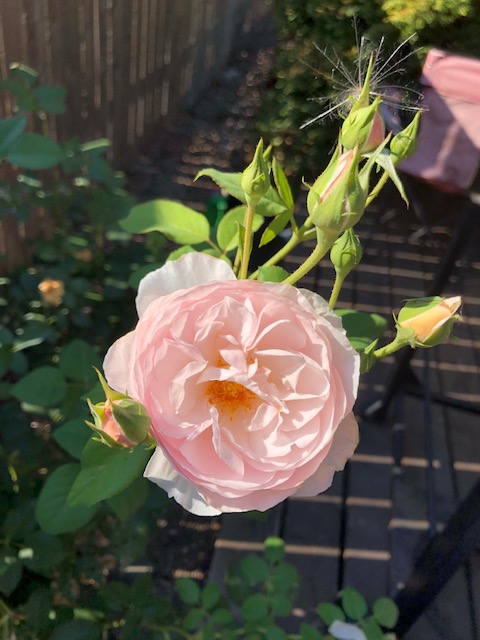