Events have got in the way of blogging, and my desire today to clean and organize even a little bit has me late writing my blog. I also read a book these days, and now my eyes are seeing double while I type. This should clear up soon!

It is Sunday, and I have put away most of the laundry monster that has covered the floor for some time. The need for naps and resting is mostly a memory now. Simply put, the iron replacement is working. I have also sworn off aspirin, and various leakage has halted.

Working backward, I just finished the Cthulhu-based Sherlock Holmes series, and it was just OK, I would say. I thought the author too freely changed the story, but I read the whole three books, and the last 1/4 of the previous book was a page-turner: The Cthulhu Casebooks – Sherlock Holmes and the Sussex Sea-Devils. This seemed the best of the three books and I thought this book, the last 1/2 or so, fit both Holmes and The Mythos best.

Before this, I fried hamburgers, frozen patties from Safeway, heated a can of chili with beans, and Corwin and I had a chili burger on bread. Susie just has cheddar cheese on her burger with Riser’s Potato Salad.

I spent the rest of Sunday watching Season 1 of the new Doctor Who while cleaning and doing laundry. The laundry monster had turned into a pile on the floor, and it needed to be defeated and much rewashed. I had decided to bring this under control.

I also hoped to clean the frig and get my counter space back in the kitchen, but that will wait another day.

I made buckwheat pancakes and sausages for breakfast/lunch. I like buckwheat as that is what they served in the Laingsburg Pancake Breakfast in the 1970s. I liked the more rustic taste. I can still see all the now mostly gone biz men at the grills and singing, “hotcakes., hotcakes!” I remember Mr. Hurst singing with gusto. I only serve them in the house, and usually, nobody is awake when I make them. I might call out “hot cakes!” by myself.

Saturday was a bit different for me. No meetings from the shoe company this weekend. I slept in more than I meant to. I got Susie and me outside and in the car by 11ish, and we reached McMinnville around noon. It is the UFO Festival which has moved to September because of Covid-19. We brought the new travel wheelchair to practice a bit.

I think the fest is a bit faded by a lower turnout, and some events like the movie fest were canceled. I have never attended before. We had not dressed up for the festival and will definitely return again with tin foil hats. 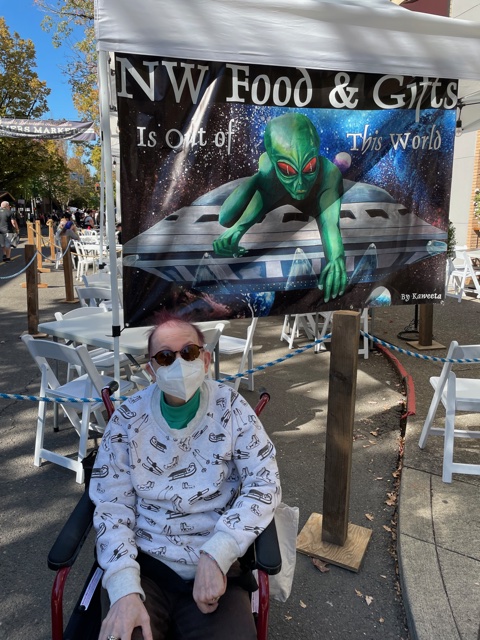 I did meet some true believers and bought their self-published and illustrated zine. A small pamphlet. Susie and I had lunch/breakfast there. All seating for all food was outside. We felt safe as most folks had on masks, and everyone was careful.

An observation, I noticed many girls dressed in tied-off shirts, short and tight skirts, and other scanty outfits. “Earth Girls Are Easy” theme was on full display. Folks were happy and enjoying a nearly perfect day in October.

We drove home with a t-shirt from the event for Susie, a Roswell patch for Corwin, and a caramel apple that we sliced up and shared between Susie and me on Sunday. It was perfect.

That night, we played Wingspan’s board game at Cory’s house with his wife Jenifer and their neighbors Mackers and Ann. Mackers won. We had a few drinks, and I helped remind everyone how to play.

Moving to Friday, this will be shorter. I worked the day with various status and crises of the moment at the shoe company. We then met Mariah at Golden Valley Brewery and had dinner and drinks. We had a nice dinner.

I was hacked in Facebook messaging and spent the next three hours withdrawing some link that spread the infection. Then, finally, I was able to clean up most of it.

I hope that this crazy summary works for you.