Thursday started with me up early. It was time to move to the apartment. I showered and cleaned up, and started down to the included breakfast. One more bagel and yogurt with coffee. Then, back up to the room to pack with the wheelchair that was in baggage check after the ambulance.

Packing was not tricky, but I could not find Susie’s passport. After a lot of unpacking, I finally found the passport in my carry-on; I had put it there carefully so I would “know” where it was the day before. I repacked everything and checked all the draws, and found more to pack.

Finally, all the draws, cabinets, safe, and floor were clear of our items; I stacked everything on the wheelchair and headed out. I checked out of the hotel and said goodbye. 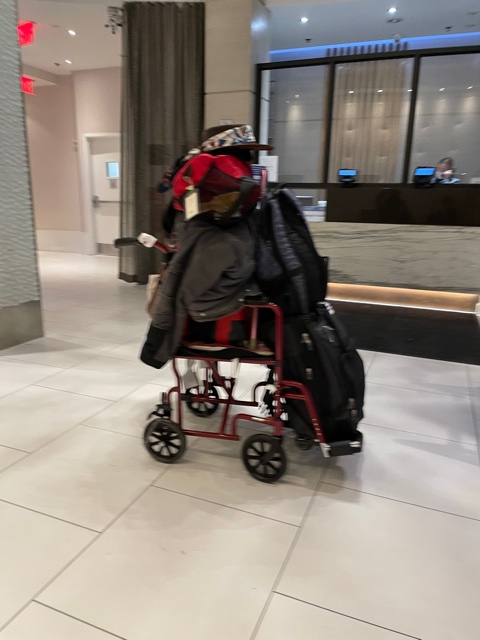 The XL Uber selected and arrived, the driver a bit impatient while I packed everything in the SUV.

He drove me to the Upper Westside at 104 near Amsterdam. I was unloaded, no help from the driver, and he nearly drove off with my carry-on (with all the passports!) and laptop. I ran and banged on the closing back door and got the last items. A little more excitement for me.

I managed to reassemble the pile on the wheelchair and get everything up to 10G. The move is finished!

I was surprised that the apartment was cleaned again since I was there and the beds made. I arranged things a bit and then headed out again. I switched to a lighter shirt as the sweater is too warm with the walking, subway, and bright sun.

It was only a few minutes past ten when visiting hours started, and I joined the queue. The security guy told me about his experience after telling him I was there because my wife had a stroke. He said his life was broken, and God put it back together and is now better than before. “It will be better than before,” was his hope for me. Not what you are expecting in NYC. 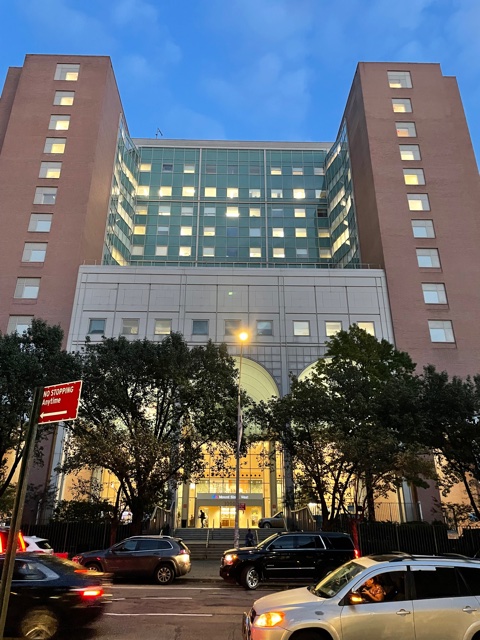 Susie was a bit blah (her words), but she looked fine. She was tired of being in the hospital, also a good sign.

PT showed up, Sam, and he walked with Susie down the hall and back with a walker. He said that Susie has her balance back and is stronger.

Occupational Therapy also came by and worked with Susie and had her do some exercises.

I slipped out for Greek food again at the Greek Kitchen. I had the lamb this time. It was very spicy and large chunks of lamb medium-rare or even rare-ish. The salad was good, and I had baked potatoes, Greek styled, that was perfect.

Susie’s heart ran to a dangerous rate of 170 when she was moved to the bed. This caused some panic, but Susie felt fine. A quick EKG showed nothing abnormal. Oddly, this event occurred with the move to the bed, not the PR or OT.

I stayed through Susie having dinner. I was worried about a repeat of the heart issue, but her BP went to the usual low numbers with a resting heart rate. Susie seemed out of danger.

I went to CVS pharmacy and picked up laundry stuff, and then carried it around. Then, I found a fruit juice place and met a Tibetan doctor running the business. He made me an iron-centric drink. He also gave me their website if I need more medical advice. They offered to help in any way. NYC has been very kind to me.

I met Kat at her place, and we went down the street to the highest-rated Mexican place in Hell’s Kitchen, El Centro. You order online when sitting at a table. The food was good; my tacos were the street style.

I then walked to Columbus Station and took the 1 train back, and walked the two blocks.