The day started with me up before 8 and rushing like a crazy person. This was my packing and organizing day.

I first called the hotel I stayed at, Fairfield Inn, thanked them again for all their help and told them we were leaving. They were happy to hear that Susie was getting better. They also gave me the phone number of the car service they use.

I managed to get transportation from Mount Sinai West scheduled; I had to give them the hospital’s address to Newark. Plus, It took three calls, but it was arranged for and even paid for.

While that was going, I did four loads of laundry. Then, I got our stuff organized back into luggage and put everything we wouldn’t need in my bag.

I then took my Nike roller bag on the subway (it was past noon). Next, I stopped by the UPS store not far from the hospital and shipped that bag home. One less thing to carry to the airport. I have clothing put out for the remaining days, of course.

I spotted a Russian Dumpling to-go place and got an order. 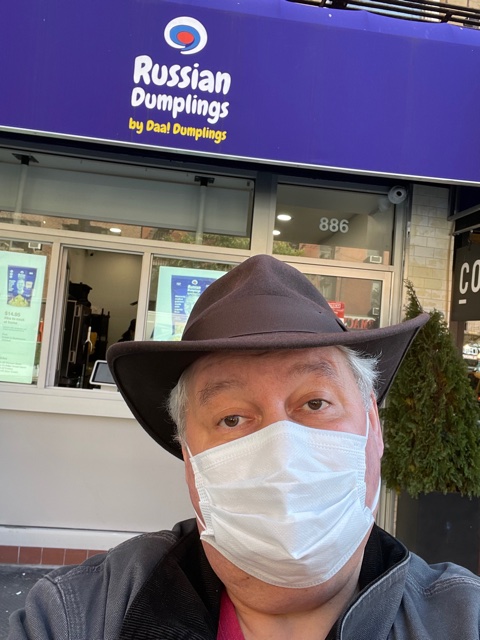 Finally, about 1ish, I was back at Mount Sinai West, and security folks remembered me and were happy to hear we were leaving.

Susie was partially dressed when I got there and was eating lunch. There was a morning PT session that I missed. Also, the new walker, to take home on the plane, had arrived. Susie was happy to see me, and I shared some of my dumplings with her. While good, I did not finish them. It was a lot of dumplings.

I helped Susie get fully dressed. I also got more light in the room. The PT folks have noticed that Susie is often not ready to fully be a part of the therapy when it is darker in the room.

Susie had Occupational Therapy while I was there, and the OT gal asked me to participate. So we walked with Susie all the way to the gym, and there, I was surprised, was most of a taxi car. We practiced getting into the back of the Buick. We then walked all the way back. The OT person was surprised by Susie’s not getting tired.

Susie’s dinner came, and I got a text from Clint that he was 40 minutes out. Clint is married to Susie’s niece and so like me an inlaw. So I met him in NYC for a few hours. He was in New Jersey for some training and popped on a bus to NYC.

We met at the transit bus station near Times Square.

Aside: Before that, I had to walk the insane tunnel between the 1 line and the rest of Times Square station. It has some ramps that are so steep that you can actually slip and fall. There is a sign that the ramps are not safe for wheelchairs! I call it the f**king endless tunnel, and I walked that thing three times on Wednesday!

Next, we jumped on a subway to the Bryant Park area and took a quick walking tour of the big public library. We did manage to get to the reading room and took a quick look at the Treasure’s show I did a few weeks ago; it was free.

Next, we walked for twenty minutes to Macy’s. Clint loves to show people the old wooden escalators. I have to admit it was fun to ride them all the way to the top and down.

That is Clint riding the wooden escalator.

Lastly, we popped on the subway back to Times Square. We went to the Beer Authority, and the security guy remembered me and asked how my wife was. I used to write the blog there at night. He was happy to hear that Susie was better.

Clint picked out the beer, and the pretzel bites were great. The rest of the food was just average. We chatted about things and caught up. We have not seen each other since the last family meetings before the pandemic in 2019.

Clint and I said goodbye at the bus station, and he reached his hotel without issue. I took the 1 train, after walking that tunnel again, and was home and just slept.

I also took a picture of my walk to Columbus Circle. I always look up and head towards the three sky scrappers. It is one of my memories of NYC, the strange skylines. 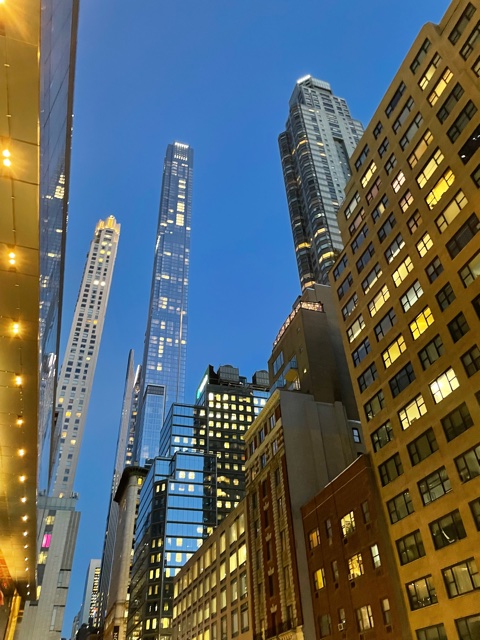 I hope you have enjoyed the blog and the stories of my accidental residency in NYC.